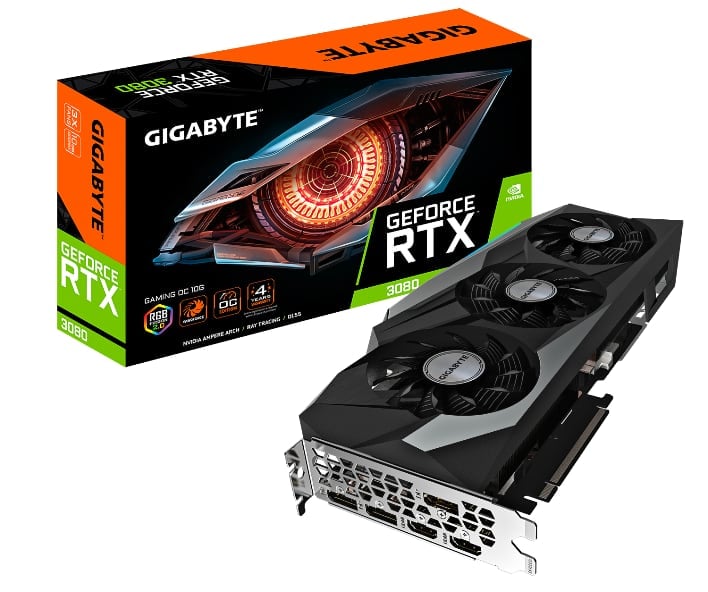 Yesterday, we brought you news that a 20GB version of the GeForce RTX 3080 is likely on the way, doubling the amount of onboard GDDR6X that is in currently-shipping cards. The news came straight from the horse's mouth, NVIDIA, via an Ampere GA102 GPU architecture whitepaper.

Now we're getting further confirmation via one of NVIDIA's trusted OEM partners: Gigabyte. The company is currently running a promotion, which was first spotted by Videocardz, where those that purchase a GeForce RTX 3080 card can get a free copy of Watch Dogs Legion by entering in their purchase details and device serial number on its website. This is pretty standard fare for graphics card manufacturers, but where things get interesting is with the drop-down box that lists eligible products.

We see not only GeForce RTX 3080 products that Gigabyte has already announced, but also unannounced models, including boards with 20GB of GDDR6X (confirming our supposition above). But that's not all, there are also references to other unannounced products including the GeForce RTX 3060, which we've previously talked about. This particular SKU comes with 8GB of GDDR6 memory.

Another interesting revelation is that NVIDIA -- and by extension Gigabyte -- will be doubling the amount of memory available for the GeForce RTX 3070 as well, since we see SKUs here with 16GB of GDDR6 instead of the standard 8GB. It should be noted that all of the GeForce RTX 3080 20GB and GeForce RTX 3070 16GB SKUs have an "S" suffix, so perhaps these may be referred to as “Super” when they are released, but that is all just speculation at this point.

Below is a full listing of the SKUs that were presented on Gigabyte’s website:

At this point, we don’t know when these cards will be released, but we have an idea that NVIDIA might be saving something special to rain on AMD’s Radeon RX 6000 “Big Navi” parade next month.