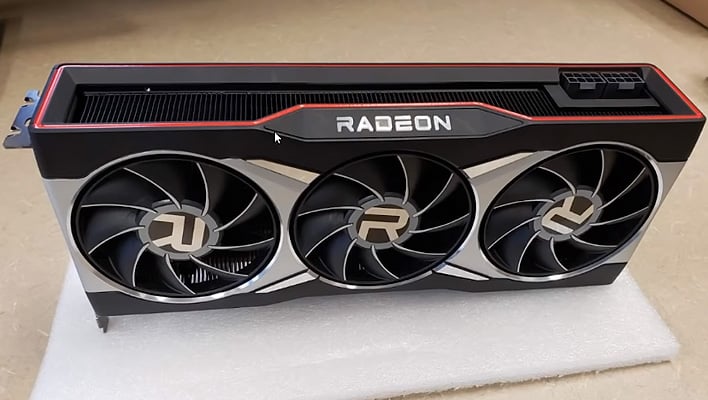 AMD is up against it, folks. NVIDIA has already announced it GeForce RTX 30 series, and if you have not done so already, check out our review of the GeForce RTX 3080 (spoiler: it's a frigging beastly performer). AMD will attempt to counter with its Radeon RX 6000 series, but we still have to wait more than a month for the unveiling. Until then, we've had some render teases to look at, and now an actual look at one of the cards, and a render of a previously unseen two-fan model.


What we have seen so far is presumably Big Navi, the unofficial name for the top dog that will represent AMD's second generation Radeon DNA architecture (otherwise known as RDNA 2). AMD has made it known that Big Navi will be a halo product, as it fully intends at competing in the high-end of the market. We will have to wait and see.
For whatever reason, AMD partnered with Epic Games to plop a low-res render of its Radeon RX 6000 in Fortnite. Fortunately, AMD also released a high-res render of the same card. But what you see in the image up above is a photo of the actual card, sent by an unnamed source to JayzTwoCents. Here is a nearly 17-minute video of him talking about the cooler design...

It's safe to say he is not a fan of the cooler, for a number of reasons—the red accent along the top and the overall design language being somewhat similar to NVIDIA's previous generation Founders Edition models being the main ones. You can form your own opinion, of course.

Around the 15min11sec mark of the video, we get a look at another card albeit in render form, a lower end model with two cooling fans instead of two. Take a peak... 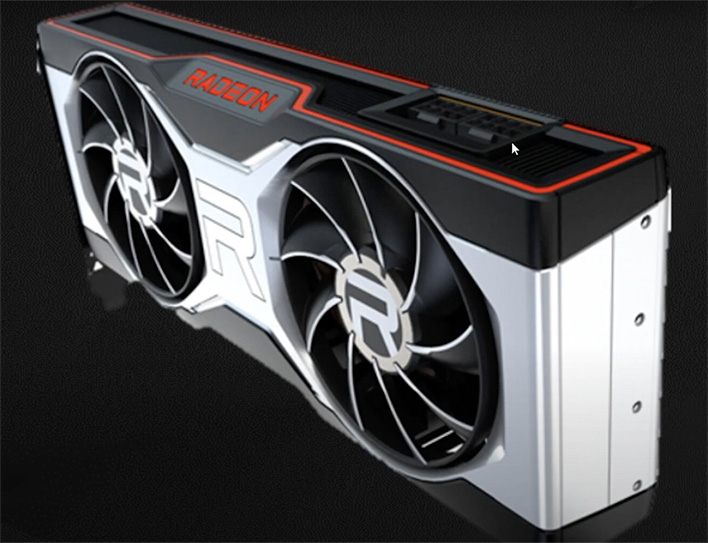 Like the other model, it sports dual 8-pin PCIe connectors, but is presumed to be a lower end SKU. And like the other card, AMD has plopped a red accent along the top, along with the Radeon logo, that we assume lights up.
The designs are interesting, especially if you have a case where you can show off the GPU. But what matters most are the performance and price, and how the bang-for-buck proposition compares to NVIDIA's latest and greatest offerings. That includes ray tracing performance, since RDNA 2 will bring that to the table.
We'll find out in several weeks—AMD is planning to introduce its Radeon RX 6000 series on October 28.