A self-proclaimed "GPU veteran" and "hunter of fake leaks" who is relatively new to the scene has posted an eye-popping claim in regards to NVIDIA's next-gen Ada Lovelace architecture. According to the leaker, someone has benched a full-fat AD102 GPU hitting a 160-frames-per-second average in Control, running at a 4K resolution with ray tracing and DLSS enabled.
That's a monstrous result, and if true, it means a potential GeForce RTX 4090 Ti graphics card could be twice as fast as a GeForce RTX 3090 Ti. Obviously we would expect a next-gen flagship to bring the boom and pummel today's cards, but to double up on performance with ray tracing turned on would be nothing short of impressive.

The performance claim comes with a bucket of caveats, though. For one, we simply don't know if this actually happened. All we have to go on is a second-hand account by a leaker with a limited track record. The claim is also short on details, such as the testbed used (CPU, RAM, etc.), if the card was overclocked, what other settings were supposedly in play (including the DLSS profile), and where exactly in the game the benchmark result occurred.
Unfortunately, Control doesn't have a built-in benchmark. That's not an insignificant wrinkle to this leak. Nevertheless, if we ignore all the caveats, here's what a performance comparison would look like... 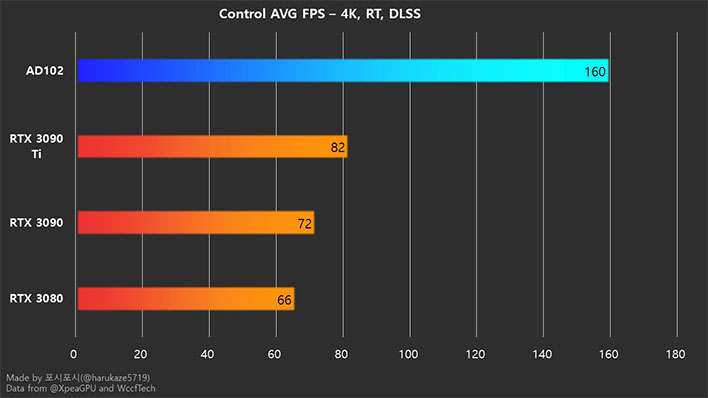 Veteran leaker @harukaze5719 plotted the result on a graph along with numbers borrowed from WCCFTech, to visualize what kind of massive performance gain is supposedly on tap.

Based on previous leaks and rumors, a full-fat AD102 GPU will serve up 18,432 CUDA cores. We can probably rule out the benchmark result being obtained from a non-Ti version of the GeForce RTX 4090, which is rumored to wield 16,384 CUDA cores and 24GB of GDDR6 or GDDR6X memory on a 384-bit bus. But we'll have to wait and see.
This latest benchmark leak comes on the heels of another leak pointing to the GeForce RTX 4090 (non-TI) scoring 19,000 in 3DMark's Time Spy Extreme benchmark. That's 67 percent higher than a factory overclocked MSI GeForce RTX 3090 Ti Suprim X, and 84.7 percent higher than a GeForce RTX 3090.
In short, there's a whole lot of hype surrounding NVIDIA's next-gen GPUs. We'll see if the GeForce RTX 40 series can live up to it all.