On Tuesday, Hong Kong-based graphics card maker AFOX stoked up excitement about the next-gen GPU race by registering a plethora of NVIDIA GeForce RTX 40 and AMD Radeon RX 7000 graphics card model names. Neither the green nor red team have confirmed upcoming model names, so these are interesting to see. However, readers must add a pinch of salt to these revelations, if only because they come via the EEC. Regular readers will know that quite a few products get registered at the EEC, but not all of them see the light of day from a computer store shelf.


AFOX’s team green products registration listing contains a full gamut of GeForce RTX 40 series cards, and then some. A GeForce RTX 4090 Ti presumably is the top-end next-gen consumer graphics card from NVIDIA, and it is listed alongside its non-Ti counterpart. Moreover, there are multiple RTX 4080, 4070, 4060, and 4050 models.
All the tiers come with regular and Ti models, but it looks like AFOX made a typo or mistake and forgot the GeForce RTX 4070 (non-Ti). It must be noted we aren’t really learning anything of substance from these model listings, they are simply as most industry watchers might expect. It isn’t expected that we will see all these models launch within a narrow time window, the rollout of the full Ada Lovelace architecture series could take months. For an idea of how the launch might play out, just look back at the previous generation high-end models come first, with the most popular mid-range segment left unaddressed until New Year. 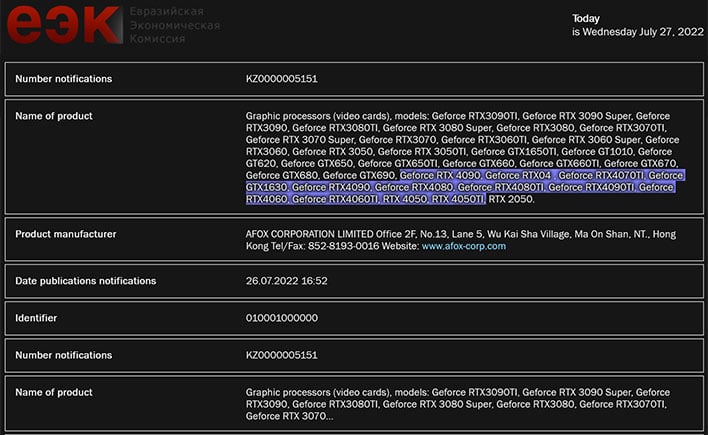 The AFOX NVIDIA listing has some other eye-opening product registrations. If you care to look closely, you will see some RTX 30 series GPUs that aren’t currently launched, and again it is possible that they might never be launched. For example, AFOX mentions GeForce RTX 30X0 Super editions are in the pipeline. Lastly, the listing contains some ancient GeForce models, for some reason, with GPUs like the GeForce GTX 660 present.

There might be a chance that NVIDIA will release some RTX 30 Super models, as there are rumors of big delays facing the RTX 40 series due to a glut of Ampere GPUs. It might make some business sense to delay Ada Lovelace launches until Ampere stocks are nearly gone, but it might then let AMD with its RDNA3 GPUs easily steal the lead. 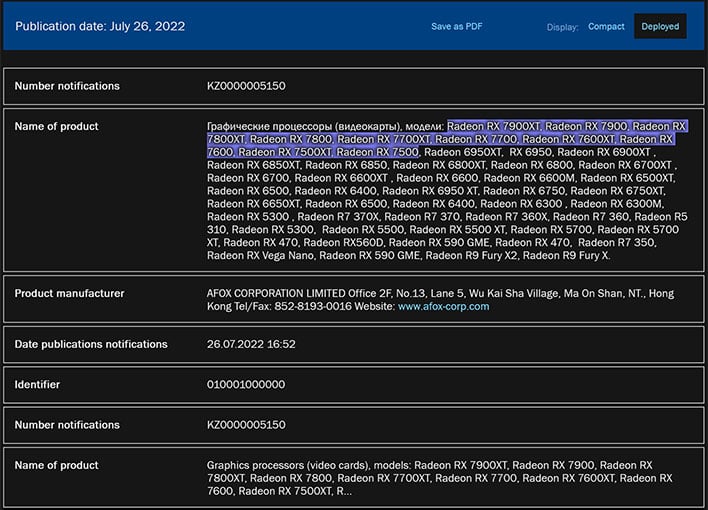 The EEC registration documents, spotted by Twitter’s harukaze5719 and reproduced in screenshots above, are available here (NVIDIA) and here (AMD).
PC enthusiasts and gamers have a lot to look forward to as we journey through the second half of 2022. As well as the next generation GPUs from AMD and NVIDIA to look forward to, we have the impending CPU and platform releases from AMD and Intel to savor.