Technology marches to the beat of its own drum and is typically unfazed by whatever events might be going on at the time. Like a silicon shortage and street prices for GPUs continuing to rise. So it should come as no surprise that leaks and rumors pointing to NVIDIA's next-generation Ada Lovelace GPUs have permeated the landscape.
We've actually been hearing about Ada Lovelace for quite some time now—since last year, when it was said the next generation GPU would be built on a 5-nanometer manufacturing process and possibly debut in late 2021 (not going to happen) or sometime in 2022 (probably will happen). At the time, we pointed out that Ada Lovelace is likely a reference to the British mathematician, and was one of nine faces that appeared on a "Company of Heroes" t-shirt that NVIDIA showed off at GTC 2018. 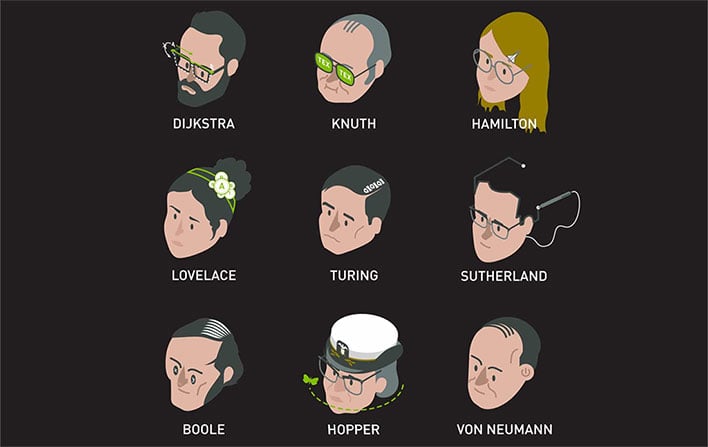 "The shirt is our best seller—after ones bearing NVIDIA’s distinctive corporate logo and the marks for NVIDIA’s GeForce brand. It’s only available to our employees and at NVIDIA’s Gear Store, the tiny, glass-walled jewel box of a shop stocked with bespoke NVIDIA gear at our Silicon Valley headquarters," NVIDIA wrote at the time.
NVIDIA designed the t-shirt to be a conversation piece, so let's have a conversation about Ada Lovelace, shall we? If the rumors are accurate, Ada Lovelace will succeed Ampere and power what we presume will be the GeForce RTX 40 series. It will be built on a TSMC's 5nm node, and hopefully supply will be less of an issue than what we are seeing now (shhhh, don't burst our bubble, hope is all we have!). 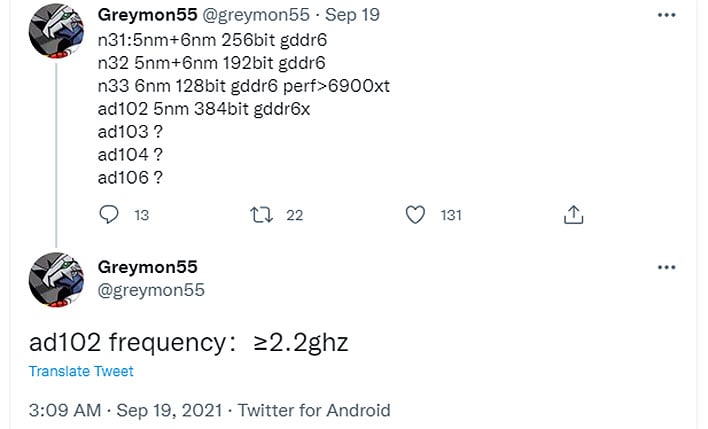 Bearing in mind that NVIDIA typically keeps details close to the vest and is prone to changing things up at the last minute, the latest leak provides some potential details about the next-gen GPU. According to @greymon55, a prominent leaker on Twitter, Ada Lovelace will culminate in the AD102 GPU with a 384-bit memory bus and GDDR6X memory, same as the GeForce RTX 3090.

This would power NVIDIA's flagship cards, including the GeForce RTX 4090 (if sticking with current naming conventions). It's also said that this part would be clocked at 2.2GHz or higher.

We have seen this GPU mentioned before. In a prior leak, it was said that AD102 will have a die size of around 600mm2 and will wield up to 18,423 CUDA cores. For comparison, the GeForce RTX 3090 (Ampere) features 10,496 CUDA cores and can boost to 1.7GHz.
At that speed and with those cores, we could be looking a massive performance jump, especially when factoring in whatever gains the new architecture and other internal bits afford. That is certainly exciting, and would also mean that AMD (Radeon RX 7000 series, RDNA 3) and Intel (Alchemist and Battlemage) will be going up against some serious competition.
So anyway, yes, the supply and demand situation stinks right now. But at least it looks like GPU makers are keeping the pedal pressed firmly to the metal, for when things finally return to normal (someday, hopefully).