One thing we can say about NVIDIA is that it is generally good about keeping its internal plans relatively close to the vest. For example, its GeForce RTX 30 series launched with higher specs at lower price points than just about everyone was anticipating. Nevertheless, not all secrets stay closely guarded, like the GeForce RTX 3060 Ti leaks that preceded its actual launch. So maybe there is something to the latest GPU roadmap rumor.
I know, I know—we are barely acquainted with Ampere at this still-early stage, and on the consumer side, snagging a GeForce RTX 30 series card at MSRP is...challenging, to say the least. And from comments NVIDIA has made, this will probably be the case throughout the first quarter of next year (and possibly longer, but we'll see).
Fair enough, but you can bet NVIDIA is already working on future designs to supplant Ampere. The question is, what exactly are those designs? Only NVIDIA knows for sure. Be that as it may, there is a fresh rumor making the rounds suggesting that a GPU built on a 5-nanometer manufacturing process, called Lovelace, will debut in 2021 or 2022.
This is interesting for a couple of reasons. The first is the situation surrounding 5nm manufacturing. As we wrote about earlier today, there is a report suggesting Apple has locked up more than 80 percent of TSMC's 5nm capacity, which includes enhanced 5nm production. That's because in addition to its iPhone and iPad products, Apple has begun designing its own silicon for its Mac products, the first of which leverage its new M1 system-on-chip.
Not much is known about Lovelace, other than it is rumored to be a 5nm architecture, and is apparently named after the British mathematician Ada Lovelace. This is one of the nine faces and names that appeared on a "Company of Heroes" t-shirt that NVIDIA showed off at GTC 2018, exclusive to its employees. Have a look... 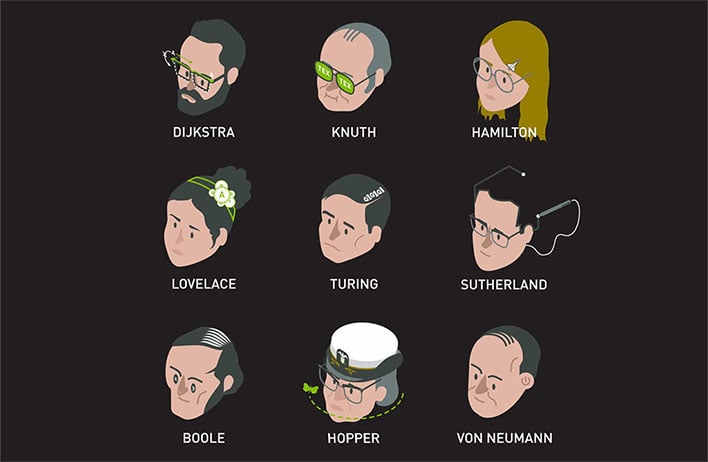 "The shirt is our best seller—after ones bearing NVIDIA’s distinctive corporate logo and the marks for NVIDIA’s GeForce brand. It’s only available to our employees and at NVIDIA’s Gear Store, the tiny, glass-walled jewel box of a shop stocked with bespoke NVIDIA gear at our Silicon Valley headquarters," NVIDIA wrote at the time.
You will notice that Turing, another GPU family from NVIDIA (named after Alan Turing), is also on the shirt. So it is entirely possibly that some these names will be attached to GPU architectures at some point (and/or AI technologies). Which brings us to the next interesting tidbit: Hopper.
Rumor has it that Hopper (which also appears on the shirt) is a pending GPU design from NVIDIA as well. It is said that Hopper represents a multi-chip module (MCM) design, and was originally supposed to come out next, ahead of Lovelace. However, it has been delayed, according to leaker @kopite7kimi.
It's not clear of Hopper was ever intended to be a consumer architecture, or exclusive to the high performance computing (HPC) market. Either way, if the leaked information is accurate, Hopper will not appear until 2023 or 2024.