So far within NVIDIA's Ampere lineup, it has released precisely one "Ti" SKU, that being the GeForce RTX 3060 Ti (which incidentally arrived ahead of the regular GeForce RTX 3060). Are more coming? Without a doubt, and rumor has it a GeForce RTX 3070 Ti with two different memory configurations (8GB and 16GB) is in the works.
Before we get to that, let's recap the regular GeForce RTX 3070. It sports 46 stream multiprocessors (SMs) for a total of 5,888 CUDA cores, along with 184 Tensor cores, 46 RT cores, 184 texture units, 96 ROPs, and 8GB of GDDR6 memory shuttling data through a 256-bit bus, delivering 448GB/s of memory bandwidth. As for clock speeds, it has a 1,500MHz base clock, 1,725MHz boost clock and 7,000MHz effective memory clock.
It's a burly card that trades blows with the previous generation GeForce RTX 2080 Ti, and in normal circumstances, pricing would start at $499 (these are not normal times, obviously, and GPUs are in short supply).
What about that GeForce RTX 3070 Ti, though? According to Uniko's Hardware, it is being built around a GA104-400-A1 GPU and will be offered in 8GB and 16GB variants. 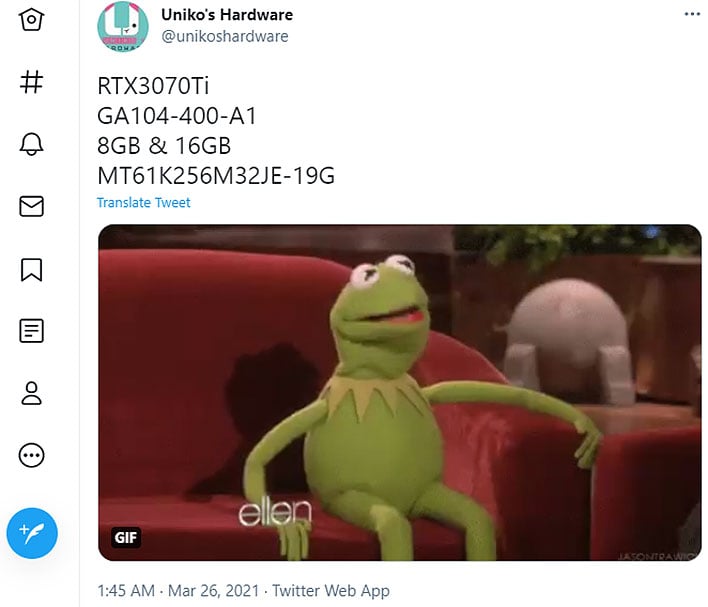 The prominent leaker also claims to have a bead on the specific type of memory. If we look up MT61K256M32JE-19G, we land on a product page at Micron's website, which reveals it to be 8-gigabit (Gb) memory of the GDDR6X variety (19Gbps).
If that is the case, the GeForce RTX 3070 Ti would join the GeForce RTX 3080 and GeForce RTX 3090 in using GDDR6X memory, whereas the rest of the current generation lineup uses GDDR6 chips (as do all of AMD's Radeon RX 6000 series). The memory will be mated to a 256-bit bus.

As for the GA104-400-A1 GPU, it is said to feature 48 SMs, giving way to 6,144 CUDA cores. Other rumored specifications include 48 RT cores, 192 Tensor cores, and 96 ROPs. GPU clocks are not yet known, but the additional cores all around and upgraded memory should provide a decent performance uplift over the regular GeForce RTX 3070, without encroaching into GeForce RTX 3080 territory.
The GeForce RTX 3070 Ti is expected to arrive in a couple of months, though don't hold your breath at actually being able to buy one. A shortage of silicon (and subsequent price hikes), continued interest in cryptocurrency mining, and scalpers armed with bots have all combined to negatively disrupt the graphics card market for gamers.