You can probably drive around whatever town you live in and see several places that have closed shop, either permanently or temporarily, as a result of the pandemic that is still claiming lives. Looking back, 2020 was a trying year for sure. Not surprisingly, however, the video game and interactive media industry is one of the sectors that thrived, growing to a nearly $140 billion business last year.
It makes sense, when you consider that much of the country and the world at larger were in lock down. Even when businesses started to open back up, the threat of COVID-19 prompted a massive surge in working from home and remote education. Throw in layoffs, and it is easy to see why the gaming sector ballooned the way it did in 2020.
According to a new SuperData report, games and interactive media grew 12 percent year-over-year to $139.9 billion in 2020, when factoring in games on PC, console, and mobile devices, as well as virtual reality and gaming video content (GVC) experiences.

"The COVID-19 pandemic shaped the games market in 2020, as audiences were forced to stay home and interact remotely. Earnings for game types popular in North America and Europe grew significantly due to the pandemic’s impact on those regions," SuperData said.
As has become the trend with games like Fortnite and the vast array of mobile titles with in-game purchases, free-to-play games generated the most revenue, account for 78 percent of the overall tally. Over half of that came fro Asian markets.
The report also notes that the premium games market grew 28 percent last year. Hits such as Doom Eternal, The Last of Us Part II, and Cyberpunk 2077 drove earnings, as did franchises like FIFA and NBA 2K.
In comparison, virtual reality revenue was smaller at $589 million, but that represents a 25 percent increase compared to the year prior. It will be interesting to see how VR performs going forward, with the comparatively affordable Oculus Quest 2 becoming more widely available. 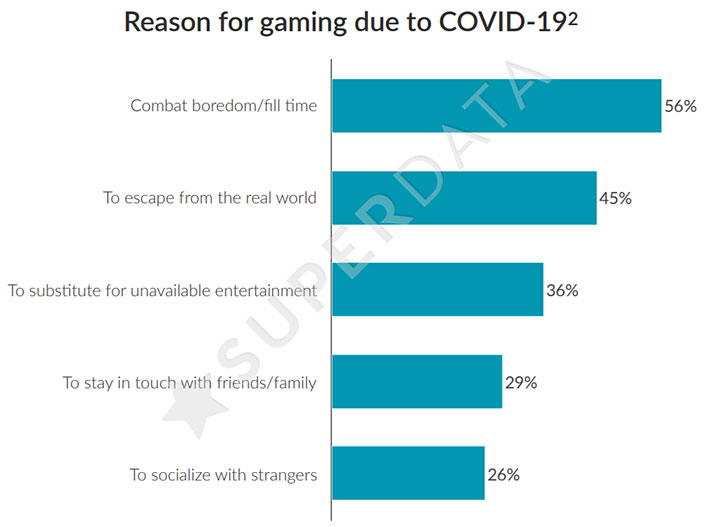 According to the report, 55 percent of US residents turned to gaming as a result of COVID-19. There were different reasons for doing so during the pandemic. Over half of gamers surveyed said they played games out of boredom, while slightly less than half saw it as an escape from the real world. And over a quarter of games said they played to stay in touch with family and friends.
Gaming hardly needs a lock down to generate big bucks. It was already the largest entertainment industry, generating more money than movies and music combined. Given the rise in esports and the release of new game consoles and next-gen PC hardware, that trend will undoubtedly stay true in 2021.