Amazon Marked Up Prices As High As 1000% On Essential Items During Pandemic, Study Claims

A consumer advocacy group published a study claiming many essential items on Amazon shot up in price during the height of pandemic shopping, and not always by third-party sellers. In no uncertain terms, the study says Amazon "engaged in price gouging on products it sells directly," sometimes by as much as 1,000 percent over the expected cost.
The biggest markup, according to the 31-page study by Public Citizen, came on corn starch. Instead of selling for $0.89, as would be expected by on price tracking data from sites like Keepa and Camelcamelcamel, Amazon sold the item for $8.99. A 50-pack of disposable face masks saw a similar massive spike, going from around $4 to $39.99, according the study.
There are some problems with the report. For example, it points out that an apples-to-apples comparison on face masks is difficult because the ones sold during the pandemic tend to be from different sources. However, the consumer watchdog stands by its assessment that a 50-pack generally sold for around $4 before the pandemic. Furthermore, it states that "many of the reviews" claim the "straps fall off and that the packaging is open or does not contain the specified amount of masks."
It wasn't just masks, though. Other essential items shot up in price as well, such as toilet paper, hand sanitizer, and disinfectants. Here's is a rundown of items that were listed as "sold by Amazon" and not third-party sellers, that saw big price increases after the Coronavirus pandemic hit, according to the study... 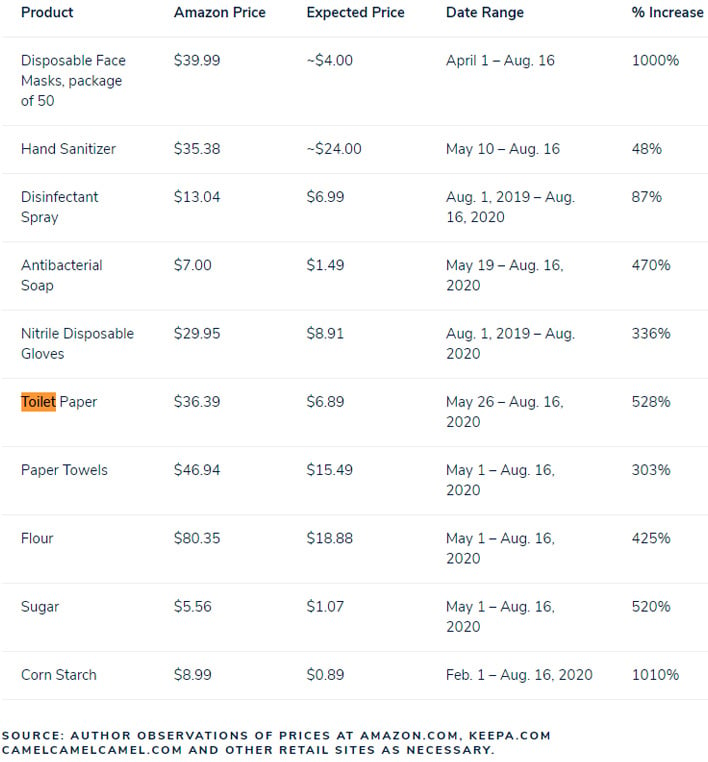 Toilet paper was indeed in high demand during the height of panic shopping—not just on Amazon, but in brick and mortar stores as well. Same goes for food and many other items. It was not uncommon to see pictures on social media of depleted store shelves for everyday goods, and empty meat aisles (it was like finding gold if you came across chicken or steak).
Amazon's counter argument is that it has been making an effort to boot third-party sellers who price gouge, as well as push for related legislation. The study gives Amazon credit in that regard, but does not let the site off the hook, since (A) it makes a lot of money from third-party sellers, and (B) items it sold directly also shot up in price.
"Price gouging is an exploitative business practice that manipulates markets and takes advantage of people at their most vulnerable and desperate...Amazon’s leadership has made clear that they do not tolerate price gouging and that they will stop third-party sellers from taking advantage of the pandemic. However, it is clear that not only are third-party sellers engaged in price gouging, but Amazon itself is selling essential products at significant price increases, and in many cases at a much higher price than other national retailers," the study states.
Public Citizen also called it "troubling that so much effort was put into blaming third-party sellers, but so little effort was made to stop the price increases," including those sold directly. In that regard, the consumer advocate says Amazon is not merely a victim in all this, but also a "perpetrator" of price gouging.
"A federal price gouging statute that augments state laws is needed to address this problem. It should be in place so that the next emergency, big or small, does not produce price gougers as this one has," the study states.