Streamers and YouTubers have recently come under the microscope of both the U.S government and music copyright holders. The popular streaming platform Twitch wrote that thousands of DMCA notifications have been pouring in since May. This has sparked a mass movement on the platform to stop playing copyrighted music during livestreams for fear of being issued a takedown notice. Now, it is reported that streamers may have to face up to 10 years in prison if they illegally stream, but that may not entirely be the case.

Earlier in December, Sen. Thom Tillis, of North Carolina, released what he called “bipartisan legislation that would punish large-scale criminal streaming services that willfully and for commercial advantage or private financial gain offer to the public illicit services dedicated to illegally streaming copyrighted material.” To explain the mouthful of a description, in theory, the law would apply only to commercial, for-profit streaming services to combat piracy. These illegal streamers could be charged with a felony rather than a misdemeanor, which could lead to up to 10 years in prison.

Ideally, a law such as this would not be necessary nor passed due to a few problems. However, it has been attached as a rider on the COVID-19 relief bill, which has now been sent to Pres. Trump’s desk for his signature. If this law is signed into effect, the primary issue is the wording of the “Protecting Lawful Streaming Act,” (PLSA), which reads as follows: 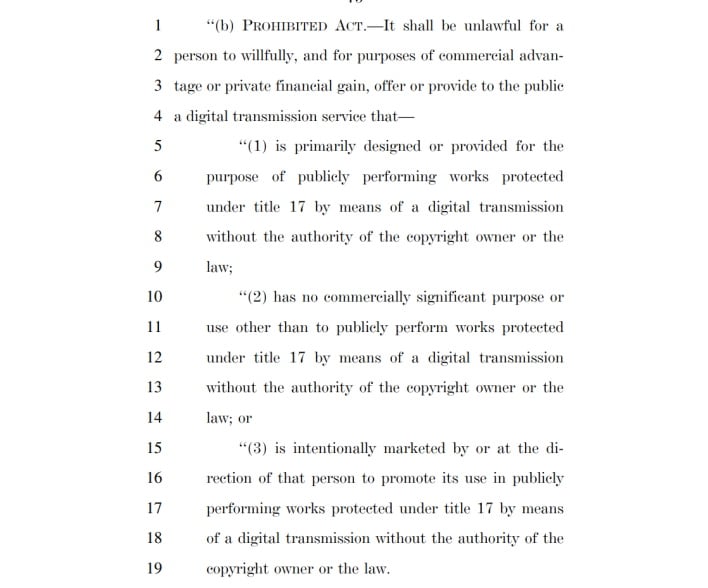 Streamers would likely be most affected by section two in the proposed act. Generally, music is played in the background of livestreams for ambient noise. Thus, music has no commercially significant purpose for the “publicly performed” livestream. The wording issue comes into play when you start to consider whether streamers on Twitch or YouTube are a “digital transmission service.” If it is deemed streamers are a service, at the extreme end, they could be “fined under this title, imprisoned not more than 10 years, or both, if the offense is a second or subsequent offense under this section or section.”

Another issue not really addressed in the act is the application of fair use and who exactly the PLSA applies to. As for fair use, can music be considered fair use on a livestream should it be used for background noise? If not, where do we draw the line? Perhaps people who play music from Spotify or YouTube at parties should be subject to the law as well, as it could be a public performance.

Ultimately, streamers and the regular people are not likely to be subject to the laws, but it is certainly concerning in a time where DMCA and takedowns are fast and loose. However, soon, Thom Tillis is looking to revise DMCA laws to prevent DMCA trolls, so perhaps new acts can clarify things. In the meantime, we will have to see how things shake out with this law and how it is applied. In any case, let us know what your interpretation of the PLSA is in the comments below.