Your Gaming PC Might Be Fast But Can It Run Cry...Er Halo Infinite At Ultra Settings?

It won't be very long now before Halo Infinite arrives on PC and console; is your gaming PC up to snuff? Probably, if going by the minimum system requirements. Things get a little murkier with the recommended specifications, and if you're hoping to play at Ultra settings you will need a beefy configuration with a high-end CPU and a meaty GPU.
We know this because the free-to-play multiplayer component of Halo Infinite got a surprise launch earlier this week during Microsoft's 20-year celebration of Xbox. When that happened, developer 343 Industries also posted four sets of requirements: Low (Minimum), Medium, High (Recommended), and Ultra. These may change when the game ships next month, but for now, here's what we're looking at... 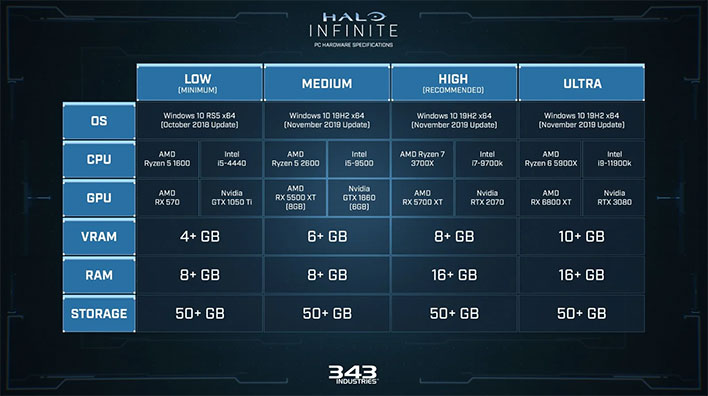 Getting in the game doesn't require anything that's particularly heavy duty—an AMD Ryzen 5 1600 or Intel Core i5-1440 CPU paired with a Radeon RX 570 or GeForce GTX 1050 Ti GPU, 4GB of RAM, and 50GB of storage space. That's not a wimpy setup but it's also not a top-of-the-line configuration.
Moving up to Medium settings increases the requirements to a Ryzen 5 2600 or Core i5-9500 CPU paired with a Radeon RX 5500 XT or GeForce GTX 1660 GPU, with the same system RAM and storage footprint. But it's at the High or Recommended tier that things get serious. At that point, the game calls for a Ryzen 7 3700X or Core i7-9700K CPU, Radeon RX 5700 XT or GeForce RTX 2070 GPU, and 16GB of RAM.
That's a fairly powerful PC and one that would be somewhat expensive to build today, given the eye-watering price tags that graphics cards command (assuming you can even find one, that is). Then there's the Ultra tier.
At Ultra settings, you'll need a PC with some of the fastest components around, including a Ryzen 9 5900X or Core i9-11900K CPU paired with a Radeon RX 6800 XT or GeForce RTX 3080 GPU. RAM and storage requirements are the same as the High tier.
Both of those CPUs sit at the upper echelon of processors and cost over $500 alone (the Ryzen 9 5900X runs $524 on Amazon and while the Core i9-11900K is a bit hard to find in stock, the Core i9-11900KF costs $585). And forget about street pricing for GPUs—the MSRPs on the Radeon RX 6800 XT and GeForce RTX 3080 check in at $579 and $699, respectively).
It remains to be seen what performance will be like when the game launches in full. By then there could be more optimizations baked into the title, as well as upgaded GPU drivers from AMD and NVIDIA aimed at wringing more framerates out of the game.
We'll find out soon—Halo Infinite launches on December 8. You can preorder the game on Steam.