The foldable smartphone innovation has evidently been garnering the purchases of more users in the past year. Samsung says that its Galaxy Flip3 motivated more people to switch than its flagship Galaxy S21 in 2021.

Foldable smartphones have improved since they first debuted a couple of years ago with better screen endurance and performance. Companies like Huawei, Honor, Motorola, and Samsung have all been busy innovating the foldable smartphone design and function. Motorola recently announced it will be producing a third generation Razr phone and Honor teased its Magic V foldable phone. But it is Samsung's Galaxy Z Flip3 smartphone that the company says has converted the most people to Samsung.

In a recent post on Samsung's Newsroom, the company stated that it has seen a 150 percent increase in consumers who switched smartphone brands for the Galaxy Flip3. Perhaps even more surprising, however, is that it also saw a 140 percent increase when compared to the company's flagship Galaxy S21. It attributes the enormous increase to the fact that the new foldable phones, both the Flip3 and Fold3, offer distinct features that appeal to specific groups in ways that other smartphones have not been able to do.

Samsung conducted a buyer survey that showed a stylish design, portability and an innovative folding form factor were the main reasons behind the surge of people buying the Galaxy Z Flip3. Another of the reasons mentioned was the fact the phone allowed the user to regulate their screen time to manage their mental health. This is in part due to the cover screen ability to share quick looks at notifications without having to open the phone and then be drawn in for longer screen sessions. Users also spoke about the Fold 3 and being drawn to its large screen for viewing content, multitasking and productivity features. 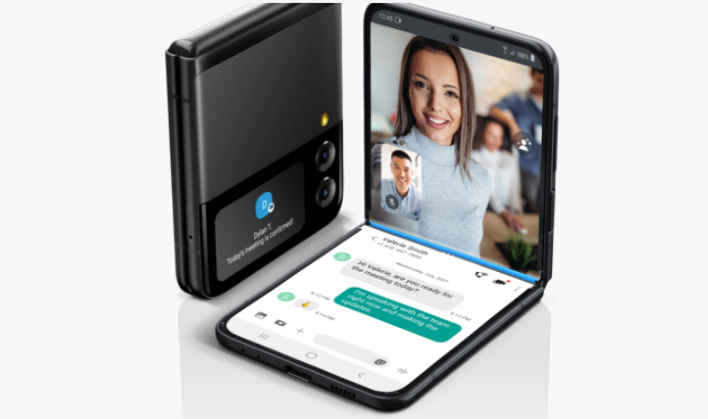 Two of the innovations that Samsung has brought to the foldable phone arena are its Infinity Flex Display and Hideaway Hinge mechanism. Both of these enabled the foldable design to be more durable and functional. The phones are allowed to fold in half and stand on their own thanks to that new hinge mechanism. This makes it easier for users to take selfies, participate in video calls, and view content. Being able to simply place the phone on a table in the half folded position is probably one of the biggest draws for some users, especially content creators. The latest versions of the Fold3 and Flip3 also have an IPX8 water resistance rating. This could be a feature that is alluring to those content creators who may need to make a video in less than ideal conditions.

Samsung has been working on the foldable phone design since it introduced the concept back in 2011. It was not until 2019 that the company was able to launch its first foldable in the Galaxy Z Flip. That Flip spoke to those who reminisced of the days of the clamshell design many years before it. Now with 2022 just around the corner, and two more generations of Flips in the books, Samsung predicts that by 2023 the foldable smartphone shipments will grow by tenfold. As additional companies introduce more foldable designs and pricing begins to get more affordable, that prediction may very well come to fruition.

Smartphone design seems to be moving toward the foldable design as more people begin to embrace it. As companies improve the durability and function of the foldable screens, we are likely to see less of the current style phones and more foldables. It will be interesting to see where companies take foldable phones in terms of design and what the next big innovation in smartphone technology will be.