The already fast and accurate fingerprint sensor on Samsung's high-end smartphone may be getting bigger as well. A recent rumor says the S23 Ultra may use Qualcomm's 3D Sonic Max fingerprint scanning technology.

Samsung launched its Galaxy S22 lineup early this year. After skipping the Note during the S21 generation, the company opted to make its high-end Ultra smartphone the Note's replacement by adding its SPen in the design. Now, the company has been rumored to possibly be adding an even larger fingerprint sensor to the upcoming Galaxy S23 Ultra, according to @Sondesix on Twitter.

Qualcomm's 3D Sonic Max fingerprint sensor is already found in some Chinese manufactured smartphones, such as the vivo X80 Pro and IQOO 9 Pro. The 3D Sonic Max increases the surface area users have available to authenticate their fingerprint and does so at a faster rate than the typical sensor. If the rumor by @Sondesix is true, this would be the first time it is used by Samsung. 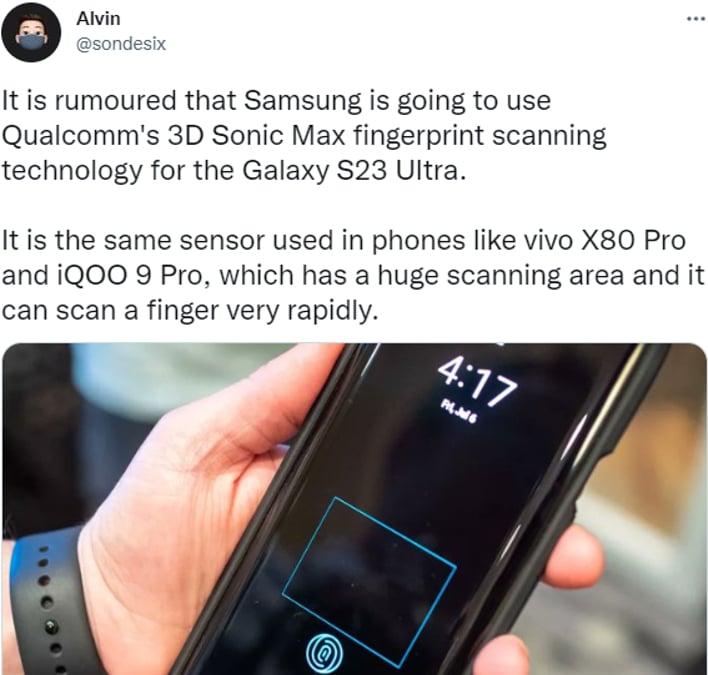 The sensor is described by Qualcomm as follows, "Using sound waves to read two fingers simultaneously, our Qualcomm 3D Sonic Max transmits an ultrasonic pulse against the fingers. The 3D pulse reflection creates a detailed 600mm² reproduction of the scanned fingerprints for quick and higher security performance."

This could be connected to the deal Samsung made with Qualcomm to use its chipset exclusively with the upcoming Galaxy S23 lineup. The terms of the contract could have included verbiage that required Qualcomm to also ship its 3D Sonic Max sensors, possibly at a discounted price as well. However, the inclusion of something like that was not discussed during Qualcomm's earnings call and is purely speculation at this point.

If the rumor does end up being true, it could mean that you would not have to be as accurate with your finger placement on the S23 Ultra as you do now. That could prove to be very convenient when trying to open your phone up with one hand and with various grips.