The smartphone upgrade cycle never ends for any manufacturer, and Samsung is no exception to that rule. The world's biggest smartphone maker seems to be pushing up its release cadence in an effort to combat slumping sales and an onslaught of new phones from Apple. We've already heard that the Galaxy S21 series might break cover officially earlier than its usual springtime release schedule would indicate. Now we're learning more about the specs of each device in the lineup, and getting confirmation from multiple sources.

Thanks to previous leaks from Twitter leaker @OnLeaks, we know that the Galaxy S21 family will come with Qualcomm's heretofore unannounced Snapdragon 875 SoC. Now the folks at Android Police claim to have much more detail on three different Galaxy S21 phones. Rumor has it there will be three variants: the Galaxy S21, S21+, and S21 Ultra. They have quite a bit in common, but would be differentiated by screen sizes and camera loadouts. 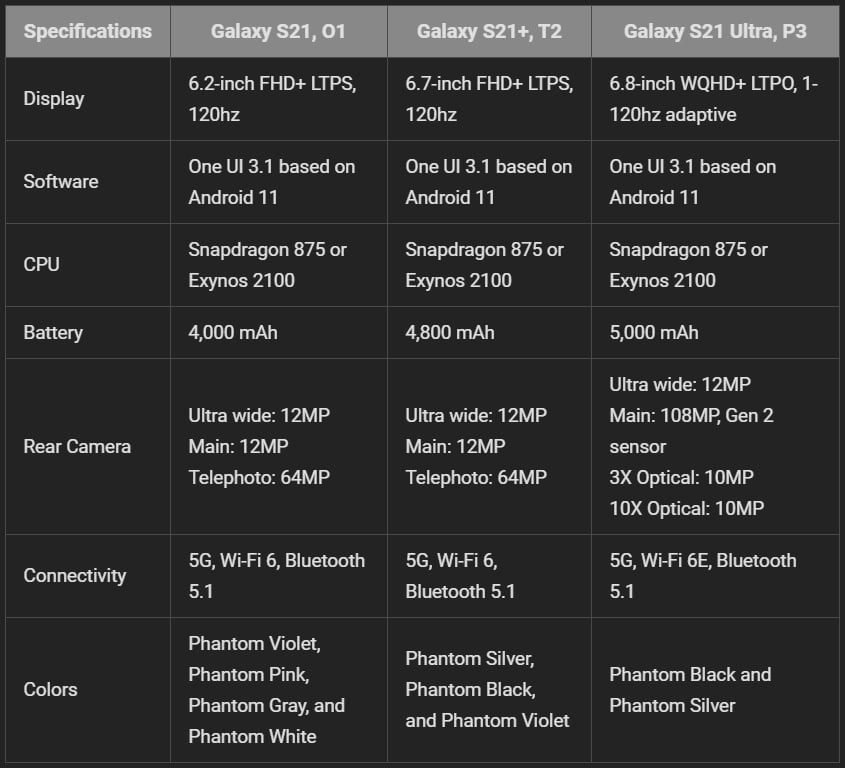 As usual, some territories will apparently see Samsung Exynos SoCs in their Galaxy S21 variants instead of Qualcomm chips. In this case, it would be another unannounced processor, the Exynos 2100. Regardless of which processor each model has, they will all still support 5G cellular signals along with Wi-Fi 6 (802.11ax) and Bluetooth 5.1. However, the Galaxy S21 Ultra will also receive Wi-Fi 6E support, which uses the 6 GHz band to crank up transfer speeds at the cost of reduced signal range and wall penetration.

The smallest version of the S21 family is the Galaxy S21. It reportedly will have a 6.2" 120 Hz AMOLED Full HD+ display and a 4,000 mAh battery. This model will have three rear cameras, including 12 megapixel main and wide-angle sensors and a 64 megapixel telephoto sensor, which Samsung often uses to group into 16 megapixel images. The Galaxy S20 use a similar approach, which we investigated in our review of the S20 Ultra. The Galaxy S21+ is just a larger version of the S21, which stretches the Full HD+ resolution to 6.7 inches and increases the battery to 4,800 mAh, but otherwise remains the same.

The Galaxy S21 Ultra does see some significant changes over the other phones in the lineup. This one has a 6.8" WQHD+ display that uses low-temperature polycrystaline oxid (LTPO) technology. As explained by OLED Info, this display controller technology uses the same polycrystaline silicon material in its switching circuits, but relies on Indium Gallium Zinc Oxide (IGZO) to drive the backplane for a power savings. Apple originally developed this technology for the Apple Watch Series 4 to extend its battery life, and now it seems Samsung is pursuing the same life-extending solution on a larger scale. 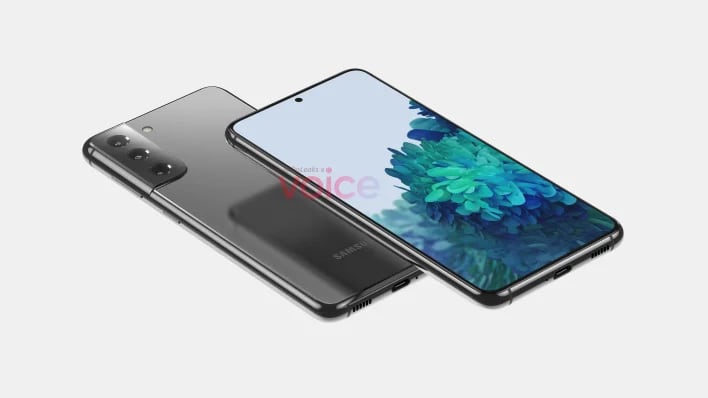 Cameras in the Galaxy S21 Ultra get a big upgrade, too. While the 12 megapixel wide-angle sensor remains unchanged, the main camera will see a second-generation 108 megapixel sensor. The Galaxy S20 used a first-gen version of that sensor and ganged the pixels into 3x3 grids to take some really nice 12 megapixel images. The telephoto lens from the other Galaxy S21 phones will split into two with a 10 MP 3x optical camera and a second 10 MP camera with a 10x zoom. Android Police also says that the renders of the S21 Ultra shared by @OnLeaks are legit, since they have been given access to them as well.

If the previous rumors pan out, we should learn much more about the Galaxy S21 soon. Rather than the usual March or April timeframe, we could see the latest smartphones from Samsung in January.