According to the spec sheet, the device will have a 120Hz Infinity-O Dynamic AMOLED display and a Dolby Atmos stereo speaker system designed by AKG. The screen on the Ultra 5G is a 6.9-inch, 3200x1440P unit featuring a 20:9 aspect ratio and 511 pixels per inch (PPI)i. The SoC is listed as a Samsung Exynos 990 paired with either 128GB or 512GB of storage and a microSD card supporting up to 1TB of additional storage.

One of the big features of this device is its camera array with the spec sheet claiming a 108MP main wide camera, 48MP telephoto, a 12MP ultra-wide, and a ToF sensor. Specs listed claim 10x optical zoom for the telephoto lens and up to 8K video recording. The front camera is said to be a 40MP wide-angle unit that can record up to 4K video. Power comes from a 5000mAh battery, and the device is IP68 water-resistant. 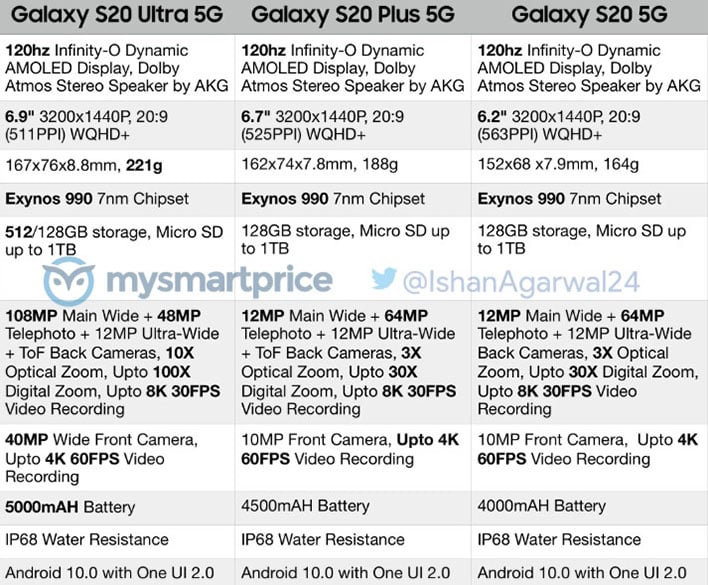 Alleged specs for the S20 Plus 5G call for the same display resolution as the Ultra, but measuring 6.7-inches and having 525ppi. This device would use the same chipset and is listed as coming in 128GB of storage only. The camera array includes a 12MP main camera, 64MP telephoto, 12MP ultra-wide, and a ToF sensor. The telephoto lens is tipped for 3x optical zoom, and the device is said to record 8K video. The front camera is a 10MP unit with 4K recording capability. Power is from a 4500mAh battery, and the device is IP68 water-resistant.

The last of the devices is the basic Galaxy S20 5G smartphone that sports a 6.2-inch size with the same resolution, but an even higher 563ppi. It uses the same Exynos 990 SoC and is also said to have 128GB of storage. The camera array includes a 12MP main camera, 64MP telephoto lens with 3x optical zoom, and a 12MP ultra-wide camera. This device has a 4000mAh battery and IP68 water-resistance.

Interestingly none of the leaked specs mentioned RAM. Previous rumors have claimed that the smartphones will have 12GB of RAM with the Ultra possibly offering a version with 16GB of RAM. We should also note that U.S.-spec models will come with the Qualcomm Snapdragon 865 SoC (and accompanying Snapdragon X55 5G modem) instead of the Exynos chip. Check out the hands-on video that leaked last week for more details on the smartphone.