Like consumers, the Federal Trade Commission is fed up with device makers taking steps to make their wares difficult to fix at home or by independent shops. In a new report submitted to Congress, the FTC outlined numerous types of repair restrictions that make fixing gadgets overly difficult, like limiting the availability of spare parts, and using gobs of adhesive.
Mobile phone makers and automobile manufactures are some of the worst offenders, though the Right to Repair movement extends into other segments as well. Like laptops, where it is becoming increasingly common for system RAM and other components to be soldered to the motherboard, especially in premium thin and light models. Same goes for some desktops, as was highlighted in a recent teardown of Microsoft's Studio all-in-one PC.
Device makers feel they have good reason for implementing some of the design elements that make do-it-yourself (DIY) repair difficult, but the FTC says it is a bunch of hogwash, noting "there is scant evidence to support manufacturers' justifications for repair restrictions."
The FTC pointed to several specific ways device makers discourage DIY repairs, even when a warranty does not explicitly require that repairs be performed by the original equipment manufacturer (OEM). They include... 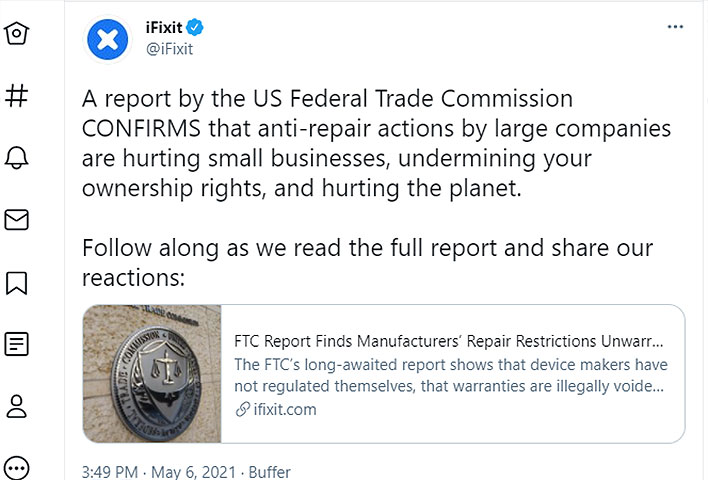 Apple got a few specific mentions in the FTC's report (PDF) titled "Nixing the Fix: An FTC Report to Congress on Repair Restrictions." One of them points to an incident where Kyle Wiens from teardown and repair site iFixIt tried to post an Apple service manual online, only to recent DMCA take-down complaints from Apple.
The report also called out Apple for using software to synchronize some iPhone parts to the device's logic board, so that those parts can only be repaired by Apple. This does not seem to be a widespread practice, though there is a concern that it could be, if other device makers follow Apple's lead in this regard.
In a blog post, iFixIt championed the report, saying it and other repair advocates voiced their concerns to the FTC two years ago during a "Nixing the Fix" workshop.
"iFixit and other repair advocates told the Commission then how manufacturers design products that frustrate repair and force owners to use the manufacturers’ branded repair services, hurting consumers and stifling competition. Manufacturers claimed the market was working fine, and that opening up repair access would undermine the safety and security of their products. Today’s report is a rebuke to their arguments," iFixIt said.
Congress directed the FTC to issue this report, and to include recommendations on how to address the problems facing the Right to Repair movement. In its report, the FTC says new regulations and consumer education on the repairability of certain products are two steps worth considering.