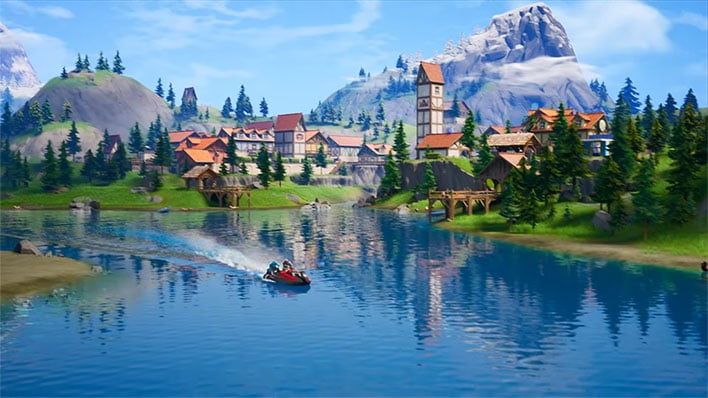 One thing you can count on in Fortnite is things are always going to change at some point. Sometimes the changes are minor, other times they alter the landscape in dramatic ways. With that said, the developers seem to be hinting that Fortnite Season 2 Chapter 3 will see the map hit by a massive flood, so get ready to swim.
This looks to be a complete flood with parts of the map going underwater. In the lead up to what appears to be an inevitable event, Fortnite players have spotted curious puddles appearing in different areas of the map. Several players have posted screenshots of the puddles on Twitter and Reddit, though they are not brand new.

🇬🇧 Around the map some puddles are appearing!
#Fortnite pic.twitter.com/fL6tXTYlEf

They have been appearing for weeks, and according to @FortTroy, the reason some people have been seeing them and some have not is because of their graphics settings. So, Epic Games may have been hinting about a flood since the beginning of Chapter 2. Either way, it sure looks like something wet is afoot for Chapter 3.

The same Twitter user also posted also recently posted "some updated/added animations for underwater swimming." In addition, some uses have pointed out that the puddles form a perimeter that look a lot like the original Fortnite map, before Season 10 came along.
Whatever is about to occur will be revealed soon enough, though not as soon as original planned. Epic Games recently announced it was extending Chapter 2 Season 2 (again) by one week.
"The new launch day of Season 3 will be Thursday, June 11. Also make sure to check out a one-time-only live event called The Device, now scheduled for Saturday, June 6 at 2 pm ET (please show up 30 minutes early to help secure your spot, space is limited!)," Epic Games says.
Epic Games is also encouraging players to complete their Battle Pass Challenges before the new Season arrives.