It is the end of the world as we know it, at least in Fortnite, and players feel fine. A doomsday countdown timer recently appeared in the battle royale smash-hit game, and this particular timer likely hints at an end-of-season event for Chapter 2 Season 2.

Data miners quickly found files for a countdown timer after the v12.60 update was dropped. This timer is now visible to players in two locations. One timer appears on the player’s home screen, while another is visible in Midas’ office (seen above). The timers are counting down to end on Saturday, May 30 at 2:05 PM  EST.

The timers are not the only indication of an end-of-season event. Tubes that lead to an orb-shaped device have been snaking their way through Fortnite’s various menus. This device is located in Midas’ office. A data miner also noticed that five hatches that surround the Agency have been activated. It is likely that these hatches will explode with activity as the timer counts down. 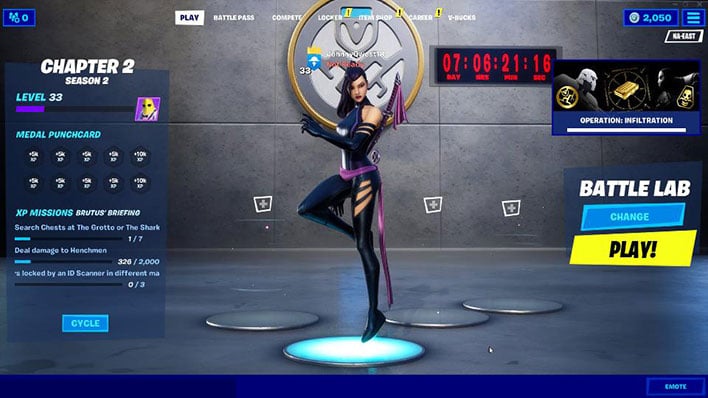 The end of the season will likely end with a stand-off between Team SHADOW and Team GHOST at the Agency. This theory is supported by the “Storm the Agency” challenges that are supposed to appear next week. Clouds have also begun to encircle the Agency, which will probably be destroyed during the ensuing battle.

There have been a few wilder theories that have circulated on the Internet over the last few days. Some believe that the end of the season will include a massive explosion that will sink the map underwater. Chapter 2 Season 3 would therefore have an aquatic theme. This would certainly add an interesting new element to the gameplay.

Many were initially concerned that there would not be an end-of-season event. Chapter 2 Season 2 was originally supposed to end on April 30th. However, Epic Games extended the current season to June 4th. They promised to continue to provide fresh content like new challenges and bonus XP. Epic Games did not provide a reason for the extension, but many suspected it was due to the current health crisis. It now at least appears that the current season will end with a bang.