Forget Your Free Pixel Buds With A Pixel 6 Preorder? Google's Got You Covered

Chances are if you were one of the people who ordered a new Pixel 6, you were scrambling to get your order secured. Some have realized since then that they forgot to add the free Pixel Buds Google that Google offered for pre-ordering. Do'h! Not to worry though, Google has your back.

The Pixel 6 and 6 Pro went on sale on October 19th following Google's launch event. As it was announced, people began pre-ordering the new flagship phones on the Google Store website. In the hurried moment it seems some may have overlooked that they could receive a free pair of Google's latest pair of earbuds, its Pixel Buds A-series.

This left many wondering if they had lost out on getting the free pair of earbuds. Google was quick to answer, however. One person posted on Reddit that they were one of those who got lost in the moment and forgot to add the Pixel Buds to their order. They added that they had just received an email from Google saying to not worry, and to keep watch for another email by November 3rd with further steps on how to redeem. 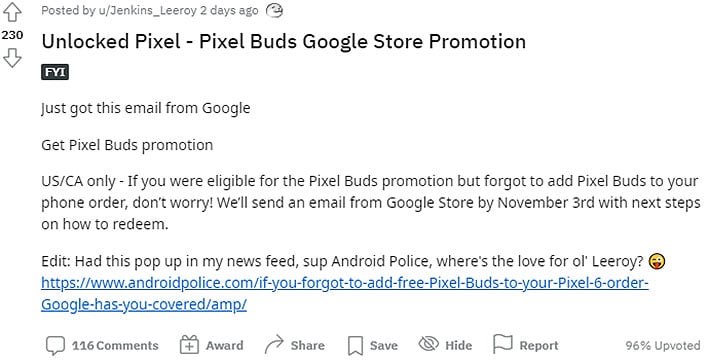 Others stated that they had not received an email from Google, while some said they had been told to make a separate order for the Pixel Buds and Google would reimburse them for the purchase. It seems as though Google is figuring out how best to address the issue, as lines of communication with buyers may not have been clear. However, kudos to Google for doing this in the first place.

Google has since stated on its Google Store Help page that anyone who forgot to add the Pixel Buds at checkout should in fact wait for further instructions in an email on how to redeem. For those that went ahead and purchased a pair of earbuds, they will be left waiting on a reimbursement.

Did you place a pre-order for a Pixel 6 and forget to add your free Pixel Buds? Let us know down in the comments along with if you went ahead and purchased a pair or are waiting on Google's follow-up email.