The number of people actively participating in the Folding@home distributed computing project has ballooned over the past month, and that has been a boon for research into COVID-19/coronavirus. When we last visited Folding@home, the project had surpassed the 1 exaFLOP barrier, making the collective faster than even the most powerful supercomputers on the planet.

This week, however, it was announced that Folding@home has now reached 2.4 exaFLOPS, more than doubling the record set in late March. To put that in perspective, that's faster than the top 500 supercomputers on Earth... combined. One exaFLOP is equal to 1,000,000,000,000,000,000 operations per second, which is almost unfathomable.

"We complement supercomputers like IBM Summit, which runs short calculations using 1000s of GPUs at once, by spreading longer calculations around the world in smaller chunks," the Folding@home team wrote on their Twitter page. 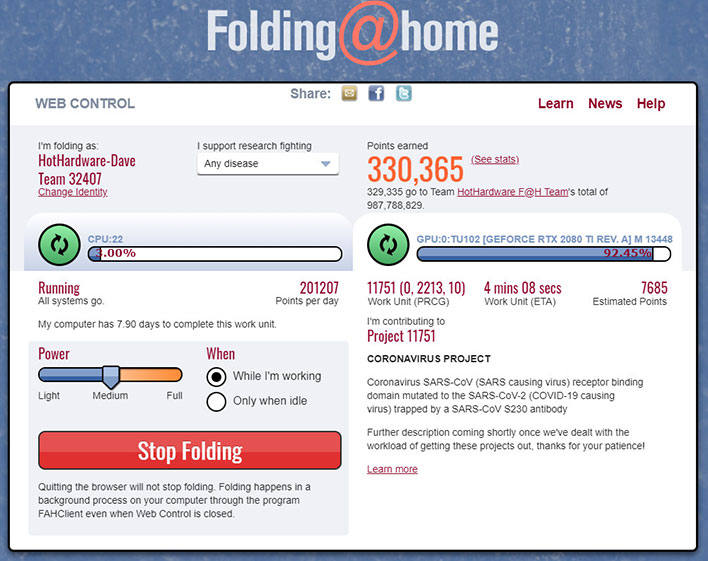 You can easily install Folding@home software on Windows, Linux, and macOS systems, which will then be using idle hardware resources to perform calculations. The software can leverage your spare CPU and/or GPU resources under Light, Medium or High settings -- as you might expect, Light puts the least amount of strain on your system, while Heavy will likely set your cooling fans into hyperactive mode.

So, what is the end result of your generosity of lending computing resources to the Folding@home project? Dr. Greg Bowman, Director of Folding@ home writes:

You can donate your unused computational resources to the Folding@home Consortium, where researchers working to advance our understanding of the structures of potential drug targets for 2019-nCoV that could aid in the design of new therapies. The data you help us generate will be quickly and openly disseminated as part of an open science collaboration of multiple laboratories around the world, giving researchers new tools that may unlock new opportunities for developing lifesaving drugs.

Folding@home first announced combined processing power of 470 petaFLOPS back on March 20th, which means that we've seen a 5x increase in less than a month.