The Folding@home network has been working hard to defeat COVID-19 (coronavirus). This battle has caused the network to pass some interesting milestones as result of renewed interest in folding for a cure or vaccine. The Folding@home network now boasts 470 PetaFLOPS of compute power and is more powerful than the world’s top 7 supercomputers. Folding@home is a “distributed computing” project. It was started by Dr. Vijay Pande at Stanford University and is now based at the Washington University in St. Louis School of Medicine. The project relies on the processing power of volunteer personal devices that process “different portions of data” simultaneously. The Folding@home team contends that this approach can “significantly accelerate our research” and it has allowed them to publish over 223 research papers as a result. 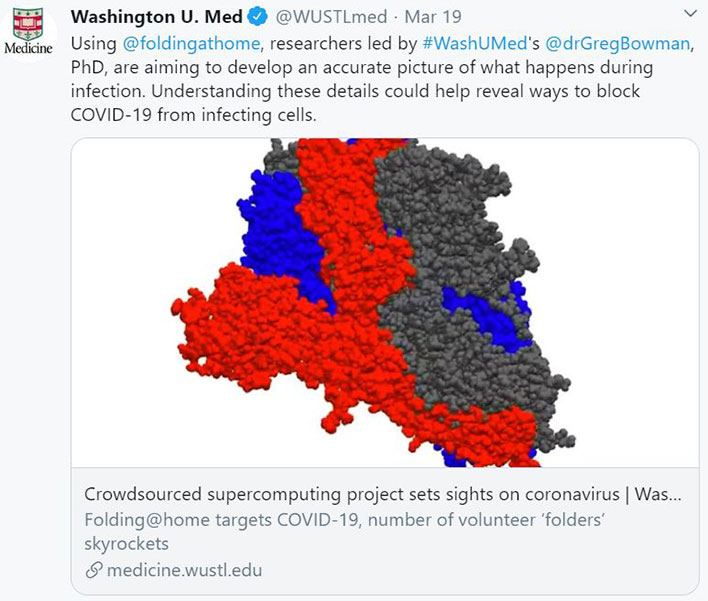 Image from the Washington University in St. Louis School of Medicine via Twitter

Why has Folding@home’s compute power increased so quickly over such a short period of time? The project has long been focused on disease research, but is now paying particular attention to the “coronavirus” or COVID-19. As a result, Folding@home has witnessed an influx of volunteer compute resource donors since the outbreak - a sure sign the humanity has it's priorities in order, at least in this area. The project was recently able to release a simulation of COVID-19’s spike protein. This simulation will help researchers to better understand what occurs during infection.

Folding@home is still looking for volunteers with spare CPUs. or GPUs. You can find out more here about how to download the installer from the Folding@home websites. The software uses idle resources so it should not interfere with your device’s performance.

NVIDIA is also calling upon users to put their idle GPU resources to use. There are several GPU projects currently available that are focused on COVID-19. You can click here to learn more about NVIDIA’s call to action, and how you can also join HotHardware’s F@H team (Team # 32407).