Just a few days ago, the Folding@home distributed computing project had reached 470 petaFLOPS of cumulative compute power, topping out the output of the seven fastest supercomputers in the world. And now? Thanks to a continued surge in activity from users joining the fight against the coronavirus pandemic, Folding@home has more than doubled the amount of data it crunching, and is in exaFLOP territory.
"Thanks to our AMAZING community, we've crossed the exaFLOP barrier! That's over 1,000,000,000,000,000,000 operations per second, making us ~10x faster than the IBM Summit!," Folding@home announced on Twitter. 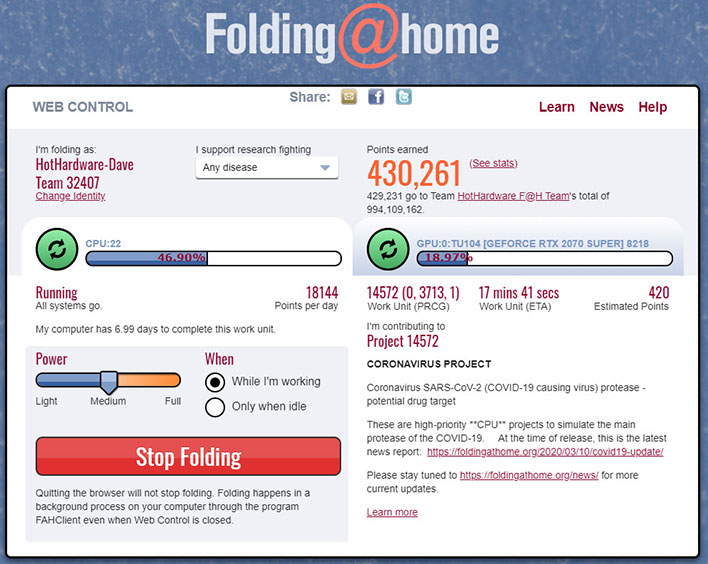 That's 18 zeros, folks. To put that figure into perspective, the collective effort of people donating their CPU and GPU cycles to the Folding@home client has made it more powerful than the top 103 supercomputers combined. That is nothing short of astounding, and it underscores how people are coming together in hopes of finding a cure or potential treatment target for COVID-19.
For anyone who is new to all this, Folding@home taps the collective power of people's PCs. When you install the client software, you are essentially allowing it to use untapped CPU and/or GPU resources to work on projects. There are three main settings: Light, Medium, and Full. You can also configure it to run only when your PC is idle, or while you are using it. 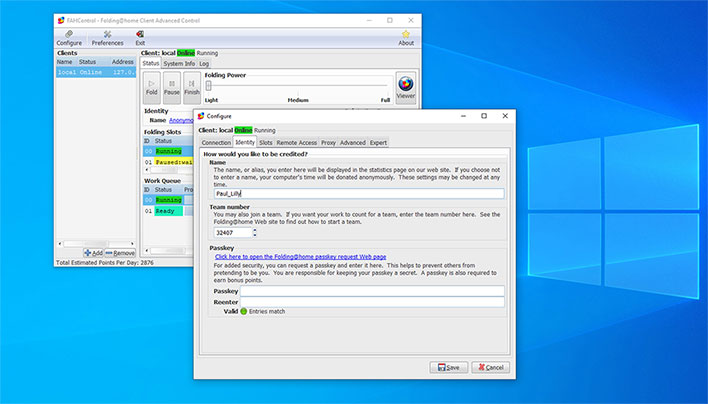 The general idea is to make use of dormant CPU and GPU resources to simulate folding protein structures, which are chains of amino acids. It is a complex thing, and when proteins misfold, they can lead to diseases. This is what Folding@home studies in hopes of designing effective drug therapies, and the collective PC resources of people joining the fight make it feasible.
Competition is also helping things. While you can fold anonymously, you also have the option of joining a team. If you want to join team HotHardware, the team number is 32407.