We've been getting some air time with DJI's recently announced Mini 3 Pro drone, an ultra lightweight flyer that dodges the need to register with the FAA by checking in at under 249 grams with the standard battery. The regulation-friendly drone, while small, boasts some big features that had us chomping (technically, champing) at the bit to take it for a test flight. We've now done that, so what do we think?
Short and to the point, we're impressed with what all DJI was able to fit on board with a drone this size, which is about a third of the weight of the Mavic 3 we reviewed last November. The Mini 3 Pro is built around a chunky brushless motor with 6-inch folding two-blade props that can propel the drone at speeds of up to 35 miles per hour. All four sets are attached to folding arms that are super easy to fold and unfold as needed.
DJI also squeezed more sensors into the Mini 3 Pro than its predecessor (Mini 2) to facilitate three-way obstacle avoidance, including forward, rear, and downward. Implementing active track technology is a first for the Mini series.
Check it out...


As you can see in our test flight, the Mini 3 Pro with its 1/1.3-inch CMOS sensor is capable of taking amazing video and stills. It can record at up 4K60 in HDR, and snap photos at up to 48 megapixels. And for those of you who post videos to Instagram and TikTok, you'll find the rotating camera a boon, as it allows for 9x16 shooting.
We also found that the Mini 3 Pro drone offers a surprisingly solid flight in moderate winds, despite its compact size. Yes, it's more sensitive to winds than heavier drones, but in terms of how it flies and handles, it definitely punches above 249-gram weight class. 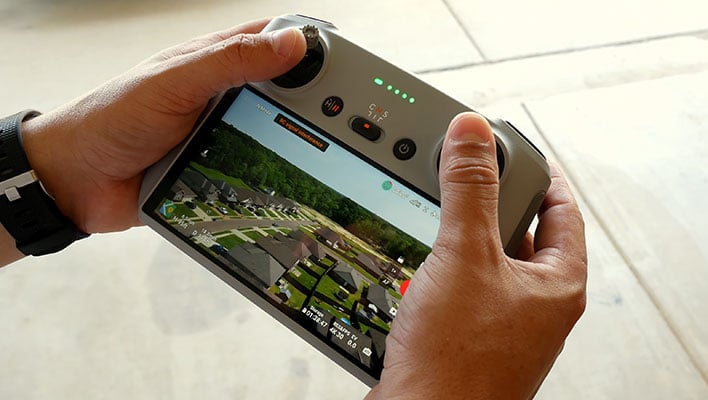 We also really like the new DJI RC. As in, a lot. It's basically a light model of the much pricier DJI RC Pro, boasting a built-in 5.5-inch screen with a 1080p resolution that boots right into DJI's Fly app. The gimbals are improved, the button layout familiar to the old transmitters, and the on top of the radio there are buttons that instantly switch between photo and video modes, as well move the camera.
Want to know more? Stay tuned, as we'll be posting an in-depth review of the DJI Mini 3 Pro drone very soon.