Fortnite Chapter 2 Season 2 has featured weekly Deadpool challenges that allow players to earn sweet Deadpool-themed swag. The next challenge does not start until tomorrow, but its details have already been leaked. Data miners have uncovered what players will need to do this week to earn a Deadpool skin in Fortnite.

All of the weekly Deadpool challenges have been relatively straightforward, and the next challenge does not seem like it will be an exception. Players will need to find “Deadpool’s 2 pistols” or “Hand Cannons” and then enter a phone booth or porta potty to transform into the “super-est of superheroes.” Players who have completed the weekly challenges will have finally unlocked the Deadpool Fortnite skin.

There also appears to be a few additional challenges if the player wants to unlock an alternate version of the Deadpool skin. Players will be tasked with either finding Deadpool’s pool floaty or dancing at Deadpool’s yacht party. These challenges will award players with a Deadpool skin that does not include Wade’s mask. It has also been hinted that the yacht that is currently located on the north-east side of the map will belong to Deadpool. Data miners believe that this is likely the yacht that is mentioned in the challenge. 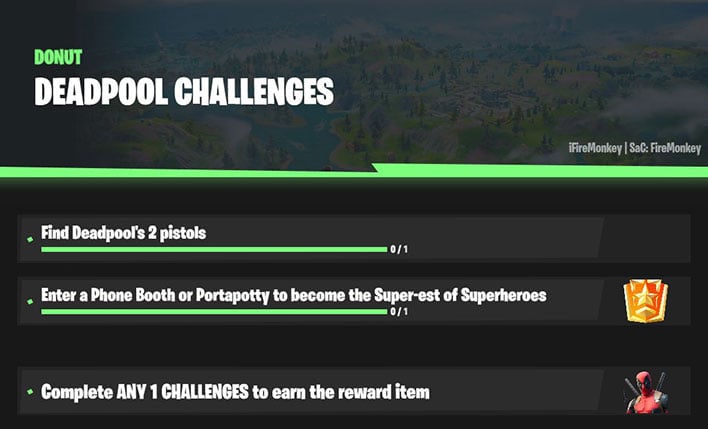 Image from
Fire Monkey via Twitter
There have been a few other Deadpool Fortnite leaks this week. Rumor has it that all of the Fornite drops will be Deadpool-themed and that there will be a Deadpool-themed Battle Bus. The legend himself may even make an appearance sometime in the next week. It is currently unclear if Deadpool will arrive tomorrow alongside the skin or on Friday, April 7th.

Players still have time to complete the Deadpool challenges for week six. Players will need to search for a black marker and drop into a match to find recruitment posters. This week’s missions will reward players with a red and black weapon wrap. There are also a variety of other weekly game challenges that give players rewards like experience points. This week’s location challenge seems to be a bit more difficult than challenges from previous weeks. You can learn more about Fortnite’s Week 6 location challenges here.