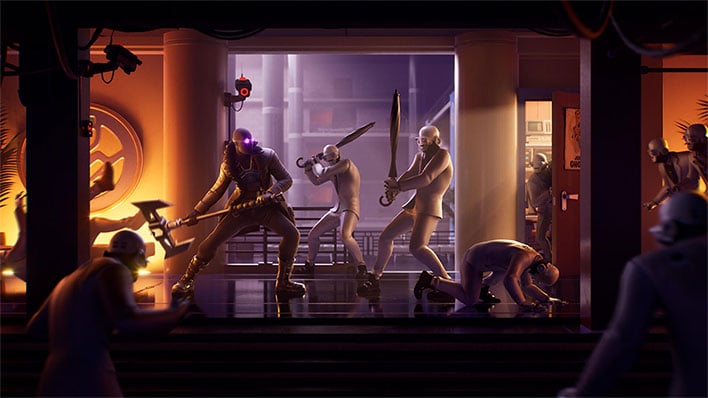 Following a series of delays, Fortnite's doomsday event called The Device finally took place yesterday, effectively putting an end to Chapter 2 Season 2. The event left many gamers miffed. Not because they did not want Season 2 to conclude—they are angry because Epic Games did not have the server capacity to host everyone who wanted to log in and witness the hoopla.
These season-ending events draw large crowds. Fortnite is already a popular game, but things kick up a notch at the conclusion of each season, because something big and potentially game-changing typically occurs. Players understandably want to witness these sort of things. And many of them did yesterday—so many, in fact, that Epic Games announced on Twitter at 1:31pm yesterday that the event had "reached capacity."

Today’s event has reached capacity. If you're not already in game, we recommend catching the event via livestream.https://t.co/5sOT64tNHlhttps://t.co/Bj9pDd0e7bhttps://t.co/UY9XcqlSwi pic.twitter.com/in5exepB8U

"Today's event has reached capacity. If you're not already in game, we recommend catching the event via livestream," Epic Games stated.
To be fair, the developer-slash-publisher did recommend that players attempt to log into Fortnite at least a half hour before the doomsday event was scheduled to take place, for this very reason. However, for a game that raked in $1.8 billion in revenue last year (according to data by SuperData Research), it seems Epic Games could put some of those funds into hosting more servers.
This sentiment was not lost on players who responded to the company's Twitter post.
"The amount of money you scam out of children for stupid skins and things that don't even help you improve your game, maybe you should pump some of it into getting servers that can handle the amount of people needing on," one user wrote.
There are a few things wrong with that statement (nobody "needs" to log into Fortnite, for example), but Epic Games is certainly catching heat for how it handled this event. Namely, some have called the company out for kicking players who were already logged in.
"My 7 year old woke up so early like it was Christmas because he was so excited and was on hours before and still got kicked off. My question is..Why is it that mostly influencers on YouTube were mostly the main ones able to get on? Even though we were on hours before," another user wrote.
In any event, the show goes on. Fortnite Chapter 2 Season 3 is scheduled to begin on Wednesday, June 16.