Fortnite's 'The Device' Event: When It Starts And Where To Camp Out As Doomsday Approaches 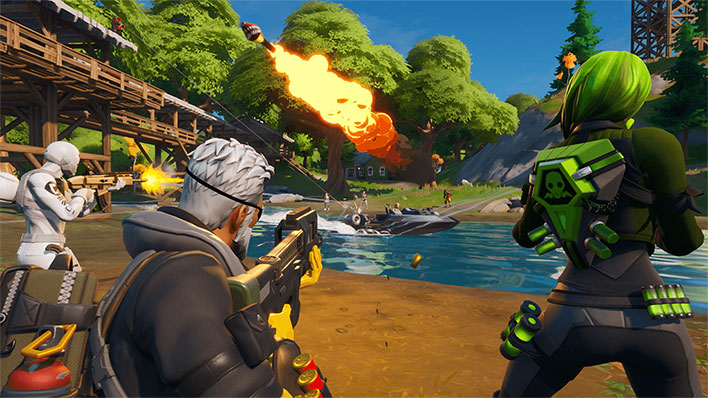 Doomsday is coming to Fortnite, just not as originally scheduled. Following a series of delays, the most recent of which was in response to Black Lives Matter protests, Fortnite current Season 2 Chapter 3 is now only days away from happening. Before the new Chapter kicks off, however, a live event called The Device will commence later today.
"The team is eager to move Fortnite forward, but we need to balance the Season 3 launch with time for the team to focus on themselves, their families, and their communities," Epic Games announced earlier this month.
Today's live The Device event is a doomsday scenario and it will take place at precisely 2:00 pm ET (11:00 am PT), according to a countdown timer over The Agency in the game. It is the same time as past events.

The hatches has oppened #Fortnite

While there is a small chance another delay could push the doomsday event further out, it seems unlikely at this point. In preparation for the event, five hatches have opened. It is expected that the hatches will explode when the countdown timer reaches 0 across the board, leading to a flood across the land.
Season ending events are usually quite the spectacle. It is a good idea to log into Fortnite ahead of time—Epic Games recommends logging in 30 minutes or more before an event is scheduled to take place. This will give you a buffer to deal with server issues, as these events draw a larger number of players.
As for where to camp out, one place to park your backside is anywhere in view of Midas' office. Tubes leading to an orb-shaped device have been snaking their way through Fortnite's menu, and the device is located in the office. This is probably going to explode at the conclusion of the countdown timer, setting off a flood.
As noted by Erik Kain at Forbes, signs for the No Sweat Insurance Company have been appearing in different places. We are not sure what exactly to make of this—it is possible those areas will be safe from the flood, or they could be demolished by it. Or may they mean nothing at all. Take your guess.
If you have trouble logging in or just want to view the event (without being in the game), you can hop on a stream instead. Ninja's channel on Mixer and NickEh30's channel on Twitch are two options.
After this is all said and done, Chapter 2 Season 3 will launch on Wednesday, June 17.