A teen who created a bot that tracks Elon Musk's private jetd wants $50,000 to take it off Twitter. The amount was a counteroffer when Musk asked the teen if he'd remove the content from social media for a $5,000 payday.

Musk is no stranger to being in the spotlight for all sorts of things. The multi-billionaire has been busy launching satellites with its SpaceX rockets into space for Starlink, which has a backlog of customers waiting to use its internet service. SpaceX is also working with NASA on numerous missions, including the upcoming Artemis missions. Not to mention all the attention he garners from Tesla and self-driving vehicles. But it is a teenager who developed a bot to track Elon's private jets that has the attention of many, including Musk himself.

Last week, 19-year old Jack Sweeney made headlines following a story that was published about him by Protocol concerning one of his Twitter bots. The bot in question tracks the comings and goings of Elon Musk's private jets, and posts those on Twitter's @ElonJet account. The young man also keeps track of other notable private planes owned by the likes of Bill Gates and Jeff Bezos. But ElonJet has taken on a life of its own. 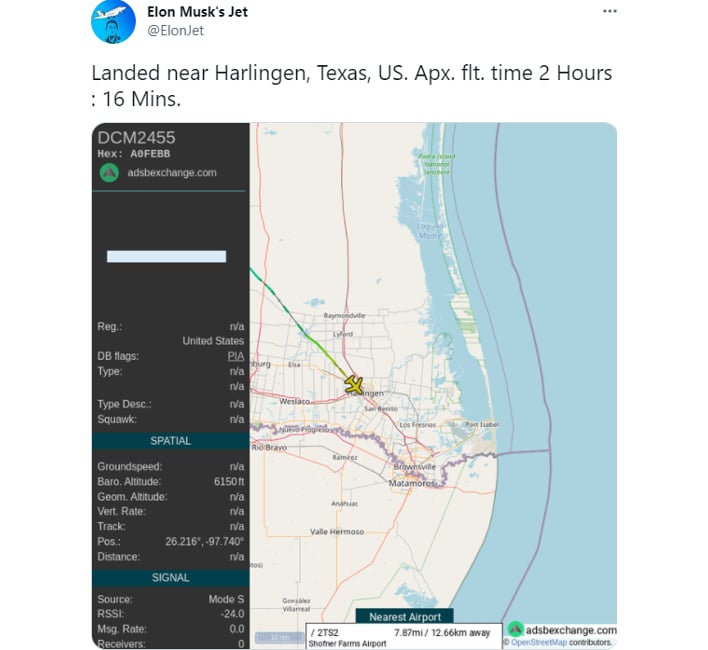 It was back in the fall of last year that Musk offered Sweeney five grand to remove the account. Musk stated, "Can you take this down? It is a security risk," according to the story from Protocol. Musk seemed concerned that the account gave vital information to "crazy people." Sweeney made Musk a counteroffer: "Any chance to up that to $50K? It would be great support in college and would possibly allow me to get a car maybe even a Model 3."

Musk told the teenager he would think about his offer, but the two have not been back in touch since then. Sweeney didn't seem to mind that Musk had not reached back out to him. He initially said that creating ElonJet taught him how to code, and the attention helped land him a part-time job with a company called UberJets.

But the teen may have had a change of heart. In a more recent interview, Sweeney said that he decided to go public after Musk brushed him off following the first interaction. "He went the opposite way of me, so why wouldn't I go the opposite way of him?," he stated in the interview with Business Insider. "I've done a lot of work on this and $5,000 is not enough," Sweeney continued.

However, Musk does not seem to have any interest in negotiating with Sweeney. Following the first interaction, Musk used some of the advice the teen gave him which makes his jets harder to track. The multi-billionaire also hinted at the idea he would not pay him when he told him that it did not "feel right to pay to shut this down" in their past conversation. Whether Musk pays the young man anything or not, the publicity and opportunities ElonJet has brought Sweeney should make for a nice payout.