The battle over privacy online rages between key platform holders who strive to protect their users from monopolistic megacorps that earn their money turning personal data into cash. In this particular case, the platform owner is Apple, a megacorp of its own whose recent App Store policy changes on iOS and macOS force app developers to disclose how user data is utilized. The opposition here is Facebook, which has made its fortunes on the backs of the users who willingly post all the intimate details of their lives on the free service.

The Electronic Frontier Foundation (EFF) has taken its stance, and unsurprisingly, it's backing Facebook's user base, and by extension, Apple's position on protecting consumer privacy. Astute readers may remember Facebook's newspaper ads blasting Apple's change in iOS, tvOS, and iPadOS version 14.3 and macOS Big Sur 11.1 in which users must opt in to apps tracking their every move. The change also requires apps to disclose exactly how that data is used for advertising, analytics, diagnostic, and other tracking purposes. The questionnaire is quite extensive and can result in large disclosures, against which Facebook is completely opposed. 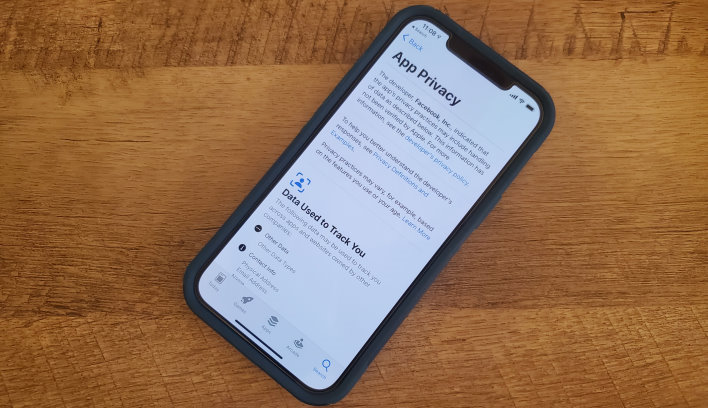 We wonder who would read seven pages of tracking disclosures and still install the app?

It's worth noting that app developers have had six months now to get their apps compliant. Apple first announced these changes as part of the keynote at the virtual World-Wide Developer's Conference (WWDC) this past June. At the time, this change was supposed to happen when iOS 14 released in September. Apple then put off enforcement an additional three months, only going into effect on December 9. In fact, iOS 14 didn't even make it out of beta before catching big business like Facebook's own Instagram and social media darling TikTok accessing cameras, clipboards, and more.

The EFF minces no words: "this latest campaign from Facebook is one more direct attack against our privacy and, despite its slick packaging, it’s also an attack against other businesses, both large and small." The Foundation's argument is that Apple's App Tracking Transparency disclosures put more power on users' hands over who has their data, how much of their data they give, and say in how that data is used. Not granting these permissions doesn't prevent the app from collecting data on the device, but it does give users power over whether that data is transmitted. More importantly, we've already seen that Apple enforces its rules with extreme prejudice. As a result of those requirements, Facebook's iOS privacy disclosure is comically huge.


Targeted ads are a big focus of the EFF's argument against Facebook. The Foundation's editorial points out that all the money earned from these ads doesn't make it to the content creators -- that is, app developers that use targeted ads don't earn much of the money. Instead that goes to the data brokers, which are the big outlets like Facebook, Google, and Twitter collecting user data. According to the EFF, only 30 to 40 percent of ad revenue goes to the content where ads appear. As an aspiring app developer myself, I can confirm that there's not much money in even targeted ads.

Lastly, the EFF points out that small businesses are in a bind, "because of Facebook’s dominance and the overpromises of the ad industry." Facebook itself pretends to care about how user data is shared by forcing businesses and apps to disclose how that data is used without itself making those same disclosures. This is a supreme act of hypocrisy in the EFF's eyes, and illustrates what the Foundation says is a need for basic privacy laws. Overall, the EFF lauds Apple's actions and challenges Google to do the same. Since Google makes so much of its revenue on search tracking and AdMob sales, it remains to be seen if Android will ever see the same protections as iOS.