For about a New York minute (not very long), it seemed as though graphics card prices would be trending back towards normal, or at least not obscenely above the various MSRPs for different models. Eventually that will happen. However, a price tracking analysis indicates it won't be occurring today, tomorrow, and probably not next week or next month. Maybe next year?
Who really knows for sure. There are a variety of factors at play, none bigger than the global shortage of silicon that has companies struggling to keep up with demand. This is affecting desktop GPUs for PC gaming, as well as dedicated game consoles like the Xbox Series X/S and PlayStation 5, as well as other products.
Cryptocurrency mining has played a role too. But then some interesting things happened.
For one, China started to really crack down on cryptocurrency mining, which in turn led to miners in China offloading used GeForce RTX 3060 cards for cheap. It's also known that Ethereum mining is getting ready to switch from a proof-of-work model to a proof-of-stake model that could severely reduce the demand for GPUs among miners. 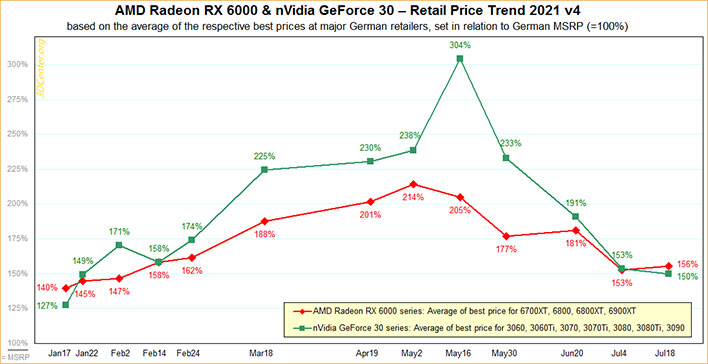 Looking at the GPU retail price trends above for NVIDIA's GeForce RTX 30 series and AMD's Radeon RX 6000 series, we see that both lineups began to descend starting around the middle of May. Unfortunately, it appears as though the decline in pricing stalled out around the beginning of July.
"Part is over, price reductions hit full brakes," 3DCenter.org stated. "Availability is the same or slightly better. Without any notable movement, it's difficult to predict when retail prices will come close to MSRP."
Indeed, you would still be hard pressed to find a modern graphics card that is both in stock and selling within striking distance of its launch price. More often than not, the cards that are available are from marketplace sellers and/or sites like eBay and Craigslist, at highly inflated prices. 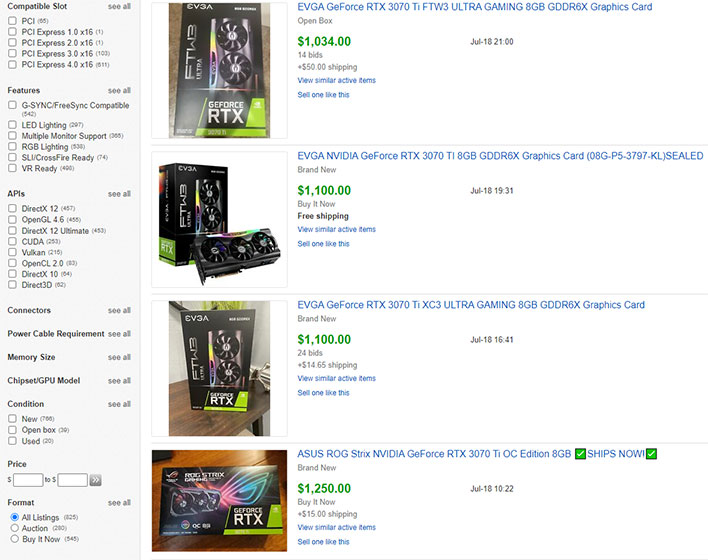 Take for example the GeForce RTX 3070 Ti. The card launched this summer at $599, but on eBay, they are generally fetching around $1,100 (sometimes a little more, sometimes a little less. And it's not just NVIDIA's cards. AMD's Radeon RX 6800 XT launched at $649 last November, and it is selling for around $1,200 on eBay.
This can't last forever, right? Right!? It really won't—Intel and TSMC are both investing billions of dollars into new and upgraded fab sites, and eventually those expansions will pay dividends. It's just that waiting is tough.