The web-based puzzle game Wordle has proven insanely popular. Viral, even, with Google paying homage to it with a cool Easter egg recently. Some folks love the fact that you can only play it once a day, but others want more. Enter Dordle, a new, more challenging word game that could be your next addiction.

Of course, there have already been several knockoffs of Wordle. We’ve also seen people hack the game, revealing its word list and predicting what the next day’s puzzle will be. What makes Dordle any different, you ask?

For starters, the game offers you two Daily Dordles each day instead of one. The catch is you enter your guesses for both at the same time. Type in the letters for your guess, and the puzzle shows you which letters are right, wrong, or placed incorrectly for both words.

Since you’re trying to guess two words at a time, you’ll get seven tries instead of the usual five. Developer Guilherme Tows, who works under the name Zaratustra Productions, describes his game as “wordle plus wordle.” Zaratustra Productions has a number of other titles, including a backwards Tetris browser game, more puzzlers, browser-based platformers, and more. 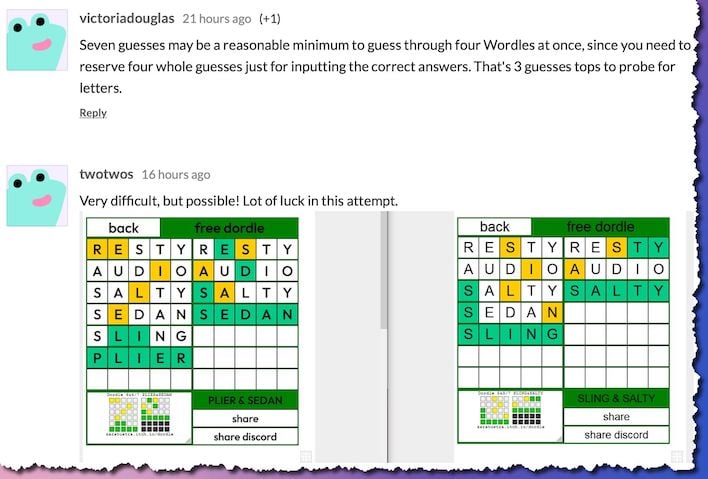 In addition to the “daily dordles,” there’s also a “free dordle” mode that allows you to play as much as you want. It works the same, presenting you with two words to try to guess in seven tries or less. One enthusiast has even gone so far as to open two dordles at once, creating a “Quadordle” puzzle.

One other major difference between dordle and its inspiration is the ease with which you could “social cheat” the game. In wordle, returning to the game’s page after you’ve done the day’s puzzle shows you your guesses from earlier. That’s not the case in dordle, meaning you could easily share winning the game in just two guesses by going back after your first try.