Remember when everyone was playing Pokemon Go? A lot of people still do, though the current craze in casual gaming belongs to Wordle, a fun and easy-to-play word guessing game created by Josh Wardle, who initially programmed the web-based game for his partner, an avid fan of crosswords. He made it public in October of last year, and two months later it went viral. Now people can't get enough. That's where the Wordle Archive comes into play.
There's virtually no learning curve in Wordle, and just some basic instructions. Essentially you have six guesses to type the day's correct five-letter word. Color coded blocks let you know if a letter you typed is in the word, and if so, if it is in the correct position. Where it gets a little trickier is understanding that letters can (and sometimes are) used twice.
You also have to type in valid words when making guesses, rather than a random string of letters. So in other words, you can't guess A-E-I-O-U, because that's not a valid word. Here's a protip, though—if you want to start with R-S-T-L-N-E, the five letters given to contestants in Wheel of Fortune, assemble them into a valid word such as R-E-N-T-S or S-T-E-R-N (you're welcome!).
There's only one word per day, so once you've made your guesses and either figured out the answer or had it revealed after the sixth unsuccessful guess, there's no point in playing again until the next day. So how do you get your fix for more Wordle action? 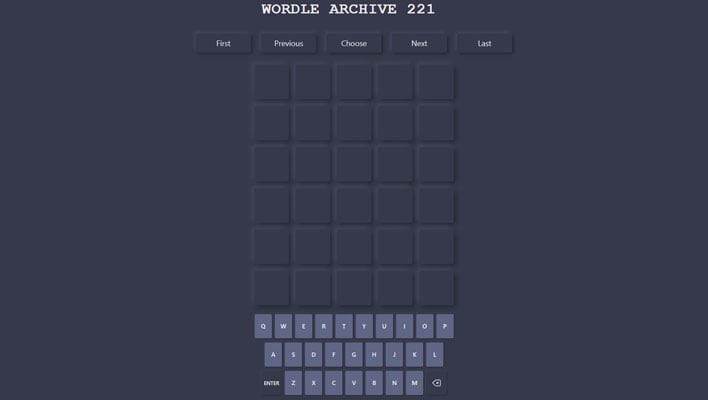 Devang Thakkar, a doctoral student at Duke University, created a Remembrance of Wordles Past archive to let you play or replay every past game. On the GitHub listing, Thakkar explains he created the open source archive "because I wanted to go back to Wordles that I had missed."
The layout looks similar and the rules are the same. However, if you're relatively new to Wordle, the archive offers an opportunity to play over 200 additional games if you're craving more after today's word. Even if you've been playing since at or around the beginning, you might still find some of the older words refreshing, depending on your memory.
Here are some other alternatives...
Do you have a favorite Wordle clone/alternative? Let us know!