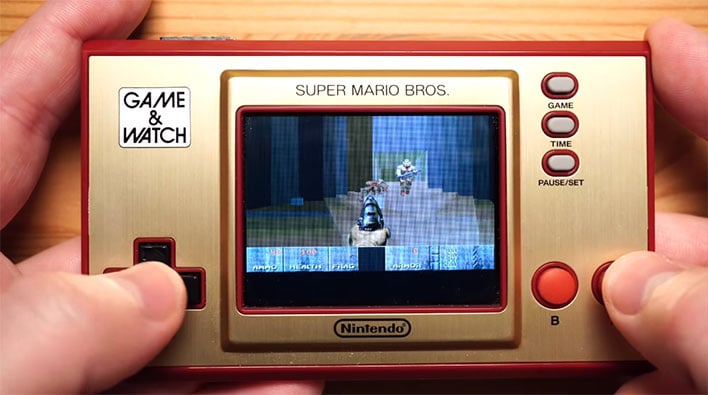 Well that did not take long. Nintendo's reborn Game And Watch handheld console has been on the market for all of two seconds (technically, about a week and a half, but you get the point—it's brand spanking new) and already it has been hacked to run Doom. Because, you know, that is like a right of passage for electronics.
Beside, if Doom can run on a Ti-Nspire or Ti-83 calculator (and it can!), then surely the Game And Watch should be up to the hell raising challenge of playing Doom, right? The answer is 'Yes!', though it was not a simple or straightforward hack that got it running. That said, no hardware modifications were required to get it to work.
At this point you might be wondering, 'What the hell is a Game And Watch?', and it is a valid question. The original Game And Watch came out all the way back in 1980 with a monochrome display and a game called Ball installed. Other versions would follow. Now four decades later from the original release, Nintendo has built an updated version with a color display and three pre-loaded games, none of which are Doom.
That is where the YouTube channel stacksmashing comes into play. Take a look...

His efforts were only semi-successfully. While the game would run, it did so with "terribly bad performance." It took multiple minutes to load and several seconds to render a single frame. And that was with stripped away textures and shoddy graphics.
Fortunately, modder Konrad Beckman "figured out how to increase the CPU and flash performance drastically." After merging Beckman's code changes into his own codebase, Doom became playable on the Game And Watch.
It is still not a great experience with the textures loaded, but it runs, and is a lot smoother when stripping them out. And perhaps more exciting, this is just the beginning. Stacksmashing says work has begun on a basic project that would allow others to start building homebrewed experiences for the Game And Watch. So in other words, you can expect more interesting hacks.