Imagine a company that has the audacity to revive a handheld game system from 40 years ago, and do it at a time when there is a glut of new and powerful gaming hardware on the market, including the Xbox Series X/S and PlayStation 5, and a bunch of new graphics cards for PCs. That company could only be Nintendo, and what it has brought back into the limelight is a modern take on the ancient Game & Watch.
Many gamers have fond memories of the original NES and Super NES, but the Game & Watch? The first version came out in 1980, before The Simpsons existed, and when a gallon of gasoline ran about a $1.20. A sort of precursor to the Game Boy, these were single-game handhelds with a LCD screen, with later models pulling double-duty as an alarm clock.
Now four decades later, there is a new version called Game & Watch: Super Mario Bros. It is a little bit different from the models that shipped so long ago. For one, it now has a color display. There is also a slightly different button arrangement, styled in the vein of an NES controller with a D-Pad on the left and A+B buttons on the right, and a USB-C port to charge in the internal battery.


The resurrected model is not a single-game system, either. It comes with three pre-loaded games this time around, including Super Mario Bros., Super Mario Bros. 2 (otherwise known as The Lost Levels), and a remade version of Ball with a Super Mario Bros. makeover.
"When you’re not saving Princess Peach, check out the included digital clock. As time passes, 35 different animations may play…including some guest appearances from Mario’s friends and foes!," Nintendo says.
Nintendo is limiting production on the Game & Watch, though it's not clear how many units it is producing. If you want one, it's $50 at Best Buy and Amazon. 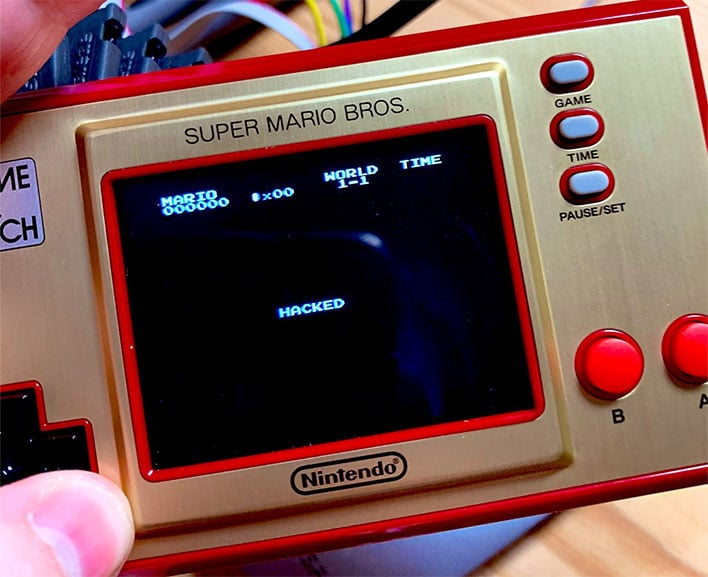 There is no official way to add more games to the handheld, but someone on Twitter has already hacked the system to get around its encryption.
"So, eventually managed to bypass the Game & Watch ROM encryption 1 day before the official release. Will try to rlease a video on it in the next few days with details on how that works!," stacksmashing tweeted.
According to the hacker, the system loads a Super Mario Bros. NES ROM into the devices RAM. So this could potentially pave the way for loading more games into the system, though it remains to be seen how involved that process might be.