Doom And Doom II Get Sweet 16:9 Rendering And 120Hz Support On Android and iOS 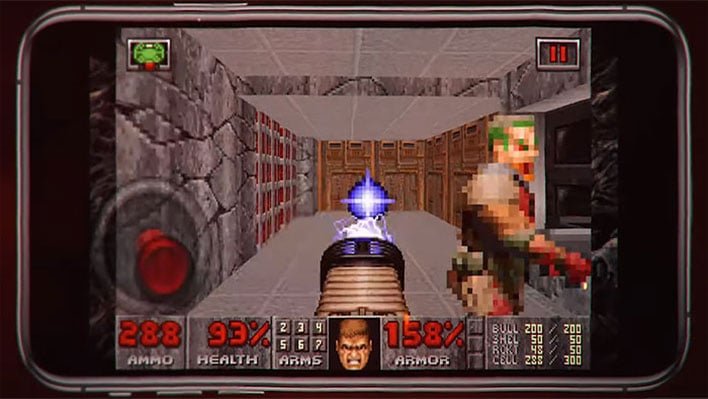 Doom and Doom II just received some much-needed and much-appreciated updates. Although all platforms received at least a few updates, the updates for the scores off mobile users are perhaps the most exciting. Android and iOS will now get to experience 16:9 rendering, 120Hz refresh rates, and other improvements with Doom and Doom II.

According to the developers, “the original DOOM renderer has been modified to natively render a 16:9 aspect ratio without any letterboxing.” Players will now be able to see more on the sides of the screen. They have also added 16:9 versions of the title screen, intermission, and ending screens. There are also widescreen versions of several add-ons, which should make the player’s experience feel more cinematic.

iOS players now have new touch controls and added controller support. Players have been given on-screen buttons instead of being forced to gesture or double tap. There are fire buttons on both sides of the screen and “...looking around while holding down the fire button lets you track enemies and fire during protracted encounters.” If on-screen buttons are too cumbersome, iOS players can now instead use a MFi controller or a PS4 or Xbox One controller that is supported by iOS 13.

Other platforms have not been left out. PC, Nintendo Switch, and PS4 players can take advantage of Gyro Aim. Gyro Aim allows players to look left or right either by turning or rolling their controller. This feature is particularly useful for tracking enemies. Players who use keyboards can also now enter classic cheat codes like “iddqd,” “idkfa,” and “idclip.”

There are several other new few fun additions with this update. The developers have added a millisecond accurate timer to encourage speedrunners and a secret area notification to let players know when they have entered a secret area for the first time. Hardcore players want to take on the new Ultra-Violence+ skill level. According to the developers, “Deathmatch/Co-op only weapons will spawn in, and enemies are fast like in Nightmare mode.” No update would be complete without several fixes. Most of the recent fixes particularly apply to the 1993 version of the game. For example, an issue has been resolved where the Former Human would not light up when firing.

Doom and Doom II became available on Android and iOS devices, while Doom, Doom II, and Doom 3 were released for the Xbox One, PlayStation 4, and Nintendo Switch in July 2019. There were initially a few complaints about backward compatibility and the need for a BethesdaNet account, but reactions to the release of the games has mostly been positive. Doom and Doom II cost a mere $4.99 USD and Doom 3 rings in at $9.99.