DJI is on a roll with a rapid-fire release of new consumer market drones. The company launched the Mavic Air 2 and Mini 2 last year, and followed that up with the FPV Drone earlier this year. Now, DJI is back again with a slight revamp of last year's Mavic Air 2, aptly called the Mavic Air 2S.

As noted by its simple "S" designation, this isn't a total rethink of the Mavic Air 2, which has already proven itself to be a competent flyer for beginners and experienced pilots alike (read the HotHardware review here). However, it does bring a few crucial improvements that make an already great drone even better. The first upgrade comes with the camera, which moves from a 1/2 sensor to a larger 1-inch sensor. 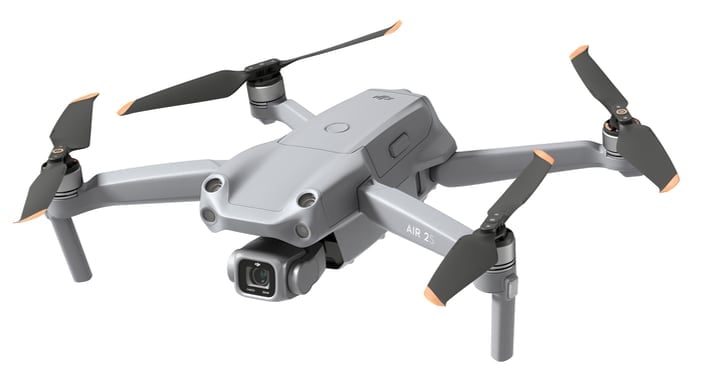 With this camera upgrade, DJI says that the Mavic Air 2S can capture 20MP still images and up to 5.4K video at 30fps. If you want to shoot at the more standard-fare resolution of 4K, you can hit 60fps (with a maximum bitrate of 150Mbps). Digital zoom options top out at 8x with 1080p 30fps video and 4x with 4K video (30fps). Users have the option of recording in either H264 or H265 standards in either 8-bit or 10-bit color profiles. Interestingly, digital zoom isn't available while taking still photos.

While the camera upgrade is perhaps the most significant addition, DJI also introduced Advanced Pilot Assistance System (APAS) 4.0. The main differentiator between APAS 4.0 and APAS 3.0 is that the former features an extra pair of top-mounted sensors for improved autonomous obstacle detection. And the Mavic Air 2S' data transmission technology has been upgraded to OcuSync 3.0 to improve reception and range between the drone and the controller.

One final addition is a new programmable flight mode called MasterShots. "After activating MasterShots, the drone will autonomously plan a flight path, choose from three different image capture modes, including Proximity, Portrait or Landscape, and start recording classic aerial footage," DJI explains. "Pilots can choose different themes and the DJI Fly app will generate a unique video that's ready to be shared with the world."

Despite all this new functionality, there are some caveats that we must mention. For starters, maximum flight time has decreased from 34 minutes to 31 minutes. The second thing to consider is that the price of the drone has increased considerably. While the Mavic Air 2 debuted at $799, the Mavic Air 2S comes in at $999. Opting for the Fly More Combo with two extra batteries, a charging hub, and a shoulder bag costs $1,299. The Mavic Air 2S is available to purchase right now.