DJI's FPV is probably one of the company's worst-kept secrets. The first leaks surrounding the drone hit the internet back in December, and last month, we were made privy to a full unboxing experience. Today, DJI officially launched the FPV, and it is just as impressive as the previous leaks made it out to be.

As its name implies, FPV refers to the first-person view, which means that you can strap on a headset to "see" through the drone's eyes. While modern drones also allow you to see what's directly ahead with either a dedicated display on the controller or by using your smartphone, donning DJI's FPV Googles V2 is an entirely immersive experience. 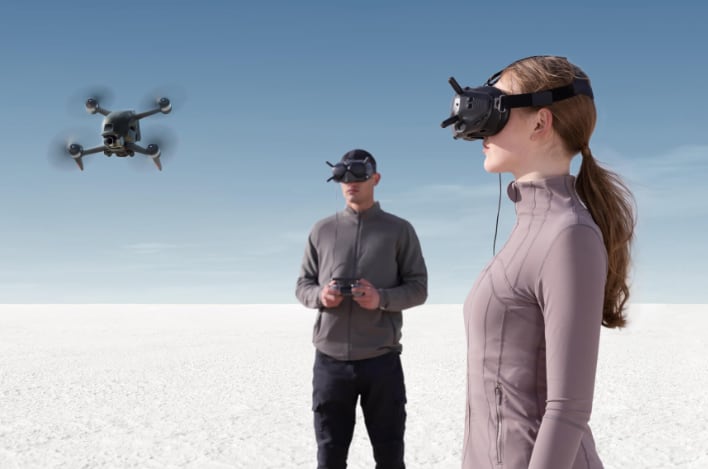 DJI says that its new drone provides a hybrid experience, combining aspects of cinematic FPV products with racing drones. "It can fly like a racer, hover like a traditional drone, accelerate like a homebuilt project and stop faster than any of them," DJI explains. The company makes it easy for beginners to hop right in and feel comfortable with the flight experience while offering up enough manual controls to appease the hardcore racing enthusiasts. It's a narrow line to walk, but DJI thinks it has found a proper balance with three different flight modes.

Normal Mode is more akin to DJI's other aerial drones, allowing it to hover in-place, use GPS positioning, and take advantage of obstacle avoidance sensors to get you out of trouble. A Manual Mode is designed for very experienced pilots that want to extract the most performance out of the FPV. In this Mode, safety sensors and hovering are disabled. Finally, there's Sport Mode, which combines the greater freedom of Manual Mode with some of the safety features afforded by Normal Mode. 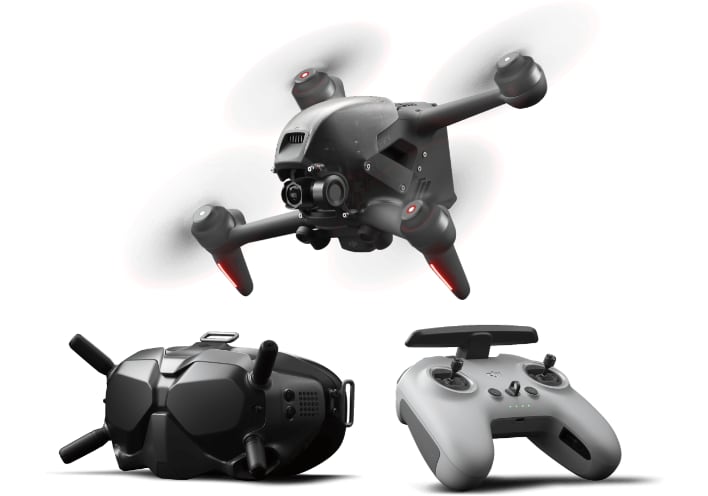 The pilot maintains a steady connection with the FPV using third-generation OcuSync wireless technology (50 Mbps), called O3, at distances up to 6.2 miles. Using the FPV Googles V2, you'll be able to see what's in front of the drone at 1440x810p at 60fps with a 142-degree FOV. If you're willing to drop down to 50fps, you can expand your FOV to 150 degrees.

When it comes to performance, DJI says that the FPV can accelerate from 0 to 60 mph in just two seconds and reach a top speed of 87 mph (not 93 mph as claimed in the previous leaks). Unfortunately, runtimes are relatively low at just 20 minutes per charge.

DJI says that the standard bundle consists of the FPV drone, controller, FPV Google V2, and a battery for $1,299. As is usually the case, a Fly More bundle brings the total number of batteries to three, and you'll also get a 3-bay charging hub for an additional $299.