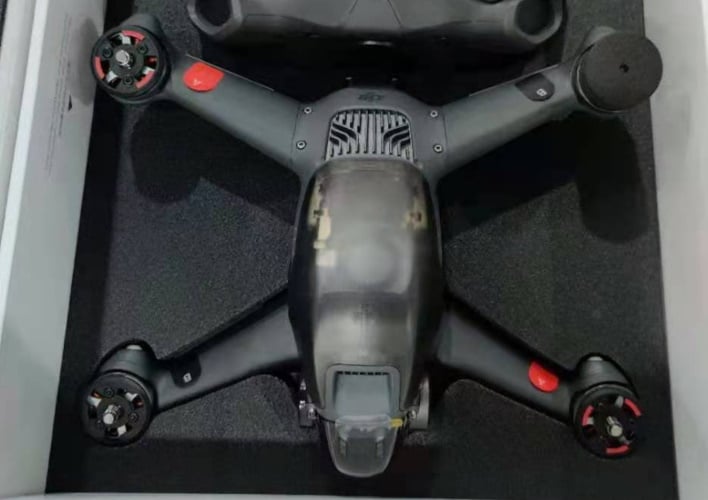 DJI drones, such as the Mini 2 we recently reviewed, have always been among the most popular consumer drones on the market. While they are something of a gold standard, DJI has primarily been only refreshing the lineup year-over-year. According to leaks online, however, DJI may be adding a new drone to the family, called FPV.

When it comes to cinematography and drones, DJI is generally a good fit. However, when it comes to first-person view (FPV) racing drones, people would typically build their own drone with lightweight parts for speed. Drone racing can have a bit of a learning curve to it as well, but maybe DJI is looking to flatten the curve with a new drone made for speed and ease of use. According to Twitter user OsitaLV and images from a post on Weibo, we could see a unique looking drone from DJI:

Looks like spaceship!
Someone who got evaluation didn't keep their NDA. pic.twitter.com/qyFycphly6

A DJI FPV drone like the one rumored could be a solid middle ground between racing and cinematography that would be easy to use. Looking closer at the pictures, this drone seems to be thick, so it can take a tumble, but it will not necessarily be a lightweight speed-demon of a drone as those seen in racing, but again, a middle ground drone. Moreover, it would save people interested in racing the trouble of building a drone (though it is a cool experience nonetheless). OsitaLV also tweeted out specs that they thought could be on this drone:

While this would be cool to see in the wild, it is likely not going to be a cheap platform. The DJI FPV goggles currently sale already run $529 by themselves. When you add a drone to that, you could be looking well over $1,000. Perhaps DJI will pull a rabbit out of a hat with pricing, but we will have to wait and see. It will definitely be an exciting wait, no matter what.