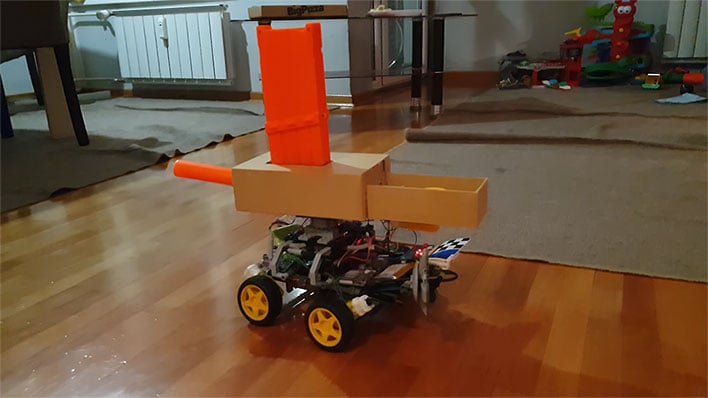 We are all doing the best we can to keep our sanity, and maybe even getting to know ourselves a bit better while in isolation. Perhaps you have an undiscovered talent that may have otherwise gone overlooked. Hey, it happens—a clever individual in Serbia found out he could build a nifty RC car that fires Nerf darts using a Raspberry Pi board (one of many neat Raspberry Pi projects to pass the time), despite not being a developer.
The details and a few videos were posted to Reddit, with user 'stiw47' explaining this is a work in progress. Down the road, he plans on adding a camera, and "maybe something else." He also intends on swapping out the cardboard pieces with 3D printed parts, which would take this fun project to the next aesthetic level.

He used a Raspberry Pi Model 3 board, along with a bunch of DC motors—four of them for driving, and three more for the shooting mechanism on the top-mounted Nerf gun. Some of the other parts include an Arduino motor shield board and Lego bricks (mostly Technic, he says). It's all controlled from a DualShock 4 gamepad, as follows...

Stiw74 says he's ware that a servo motor would be a more appropriate choice for the shooting mechanism of the Nerf gun, and under normal circumstances, he might have used one. But these are unusual times, and he stuck to whatever parts he could scrounge up from around his home.


What about the software side of the equation? "I am not [a] developer, but in most cases am enough skilled to edit working code and change it according to my needs," stiw47 explained. He then provided a handful of links to various software projects he used in this creation.
Good stuff. Hit the link in the Via field below to view the entire discussion on Reddit, and/or to give him a positive shout out on a job well done!