About AMD's Navi And Xbox Series X GPU Source Code IP Theft, It's Not That Simple 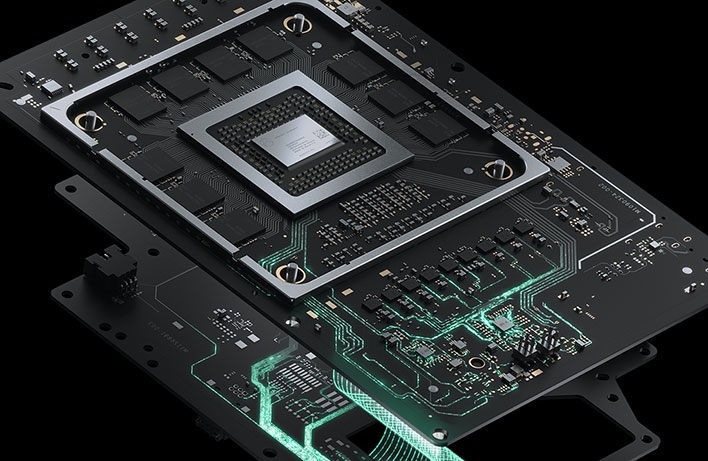 Last week, a semi-anonymous hacker made headlines when they brazenly posted supposed source code to GitHub outlining chunks of AMD's next-generation Radeon DNA 2 (RDNA 2) GPU architecture, as found in the upcoming Xbox Series X game console. The hacker valued the stolen data at $100 million, but can it really be classified as source code? And is it truly that valuable? Maybe not.
The hacker claimed to have gotten their mitts on various source files pertaining to different versions of AMD's graphics technology, the most interesting of which is Arden, the codename of the GPU inside the Xbox Series X. AMD managed to get the code removed from GitHub by filing a DMCA take down request. The hacker then uploaded a series of screenshots showing folders of stolen data, saying if no one buys the files, they will be released to everyone for free.
AMD's statement on the matter downplayed the extent of the data, saying the "stolen graphics IP is not core the competitiveness or security" of RDNA 2. In other words, even if the files were made fully available to everyone, they would not be of much use or interest.
It appears that is the case. The folks at WCCFTech spoke to "multiple individuals" who viewed the files on GitHub before they were removed. Those sources apparently have "vast experience with Verilog," which is the software the leaked files were written in, and microarchitecture design.
According to those sources, the Verilog files only represented a single and isolated function on the GPU, and not the whole GPU itself. It's not a blueprint of RDNA 2 by any stretch of the imagination. In addition, the Verilog files are built on a proprietary schematic that is only compatible with AMD's internal design language. What that essentially means is they are virtually useless to anyone outside of AMD who might get their hands on the files.
There is evidence to suggest that the full extent of stolen files share the same limiting characteristics. The folks at ExtremeTech heard the same thing from their own sources, and the general takeaway is that the information cannot be used to reverse engineer any of AMD's GPU products, they cannot be used to build an RDNA 2 GPU, and they cannot even be used to find ways of bypassing any security built into AMD's GPUs.
All that said, it is still concerning that someone was able to swipe the files in the first place, even considering that more was likely involved than just stumbling upon an unprotected server. AMD will no doubt batten down the hatches, but as far as leaks go, this one appears rather benign.