The Battlefield series is one of the most venerated names in military shooters. Starting with the legendary Battlefield 1942, the series has typically been a somewhat-realistic military combat simulator, with huge conflicts and a wide array of military hardware, including vehicles.


The series has fallen slightly on hard times lately, though. The last entry in the series, Battlefield V, didn't sell particularly well (for a Battlefield game) due at least in some part to the perception that the series' developer, DICE, had thrown out any pretext of historical realism by featuring anachronistic weapons, female soldiers, and soldiers with unrealistically-capable prosthetics in what was ostensibly a game set in World War 2. 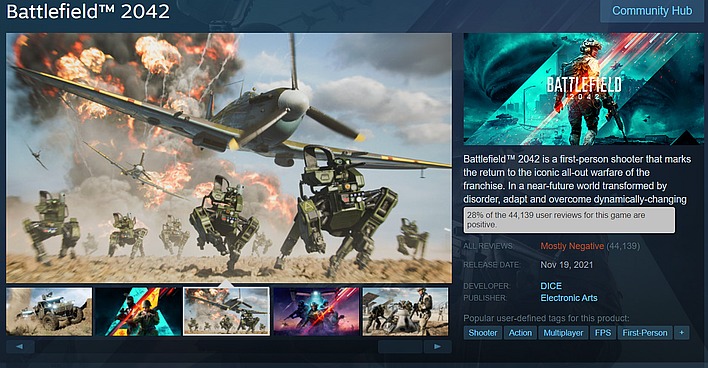 
The latest game is set in the near future and doesn't have any of those problems. Instead, it has more typical issues. Since launch less than a week ago, fans have been up in arms over the changes to the game. In fact, fans are so outraged that Battlefield 2042 has quickly become one of the worst-reviewed games in Steam's history. It currently sits at a terrible "28% positive" rating.

Going through the reviews, there are a few themes. Players complain of terrible performance despite potent processors and graphics cards. There are also a lot of complaints about missing material from previous titles. The list of left-out luxuries is so long that we can't even reproduce it here, but some of the more egregious examples include the lack of a single-player campaign, a server browser, persistent lobbies, global leaderboards, spectator mode, or hardcore mode. You can check out a Reddit post with the full list of grievances over here.

EA/DICE Promises To Make It Right

EA isn't sitting silent among the outrage, although its response might not be what you want to hear. The publisher just put out a "Battlefield Briefing" blog post that tacitly acknowledges the community's frustration and promises "two major game updates in the coming weeks." The blog post is exceedingly long and we won't be going over everything here, but we'll cover the most salient points for you.

EA says that it has heard the loudest complaints, including the missing end-of-match scoreboards, server browser, and voice chat, and that it is "carefully evaluating" the community's desire to see "legacy features" return. That doesn't give much hope for those features, because the blog post goes on to say that EA will report back with "details about [its] long-term vision for certain features and functions."


However, the post has a lot of good news for people who still want to play Battlefield 2042. EA is working on improving hit registration in its server code, something that has been a problem in Battlefield games of the past. The company also promises game engine optimizations, but admits that will be more of a long-term goal. Players on the recent Xbox consoles were having issues where the system would restart during gameplay, but that seems to have been resolved by a system update.


Regarding gunplay in the game—the quality of which is another frequent topic of complaint among fans—EA says that it is doing a sweeping balance pass across all of the guns in the game and will be reducing shot spread globally. Stationary zoomed accuracy for weapons is improving, and spread will decrease more rapidly to improve the utility of single-fire modes. The developer has also identified an issue where certain settings on the PC version (including mouse settings) aren't being applied correctly, which probably isn't helping this issue.

This barely scratches the surface of all the changes and updates that EA has planned for Battlefield 2042. The company notes that sales for this game have been much stronger at this point than sales for Battlefield V, and clearly some players are still enjoying it—one Steam review compares it to cookie dough: "you can eat it raw, but it would be better after spending some time in the oven." If you're $60 (or more) in the hole on this game and want to get your money's worth, you may want to check out the Battlefield Briefing for yourself to read the full update notes.