What To Expect As Destiny 2: The Witch Queen Takes Players To Savathun’s Ominous Throne World

Destiny 2’s: The Witch Queen expansion will be released in a little over a month. There is little known about the expansion, but Bungie has dropped a few hints here and there. Bungie recently offered the first major look into Savathûn’s Throne World ahead of the Destiny 2: Witch Queen expansion.


The trailer itself does not reveal much about the campaign, gameplay, or other elements of the upcoming expansion. However, we were able to pick up a few tidbits. First, the Titan at roughly 17 seconds is clearly carrying a glaive. The glaive will be a weapon that will be part of Destiny 2’s brand new weapon crafting system. The glaive will also be the first melee weapon to operate in a first-person mode.


A few other weapons are visible in the trailer. The Titan appears to be holding a sidearm as well, the Warlock is equipped with what appears to be a pulse rifle, and the Hunter has a fusion rifle. The Titan around 2 seconds into the video is at the ready with a rocket launcher. It is unclear if these weapons will also be part of the weapon crafting. We unfortunately know little about weapon crafting at the moment other than it will be introduced with the Witch Queen expansion and definitely involve the glaive. 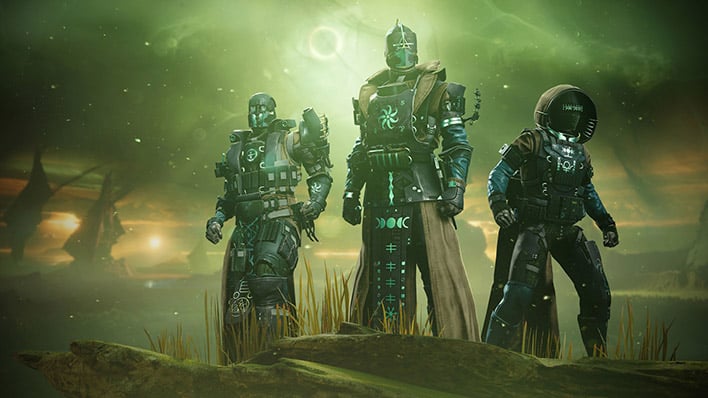 One weapon in particular caught our eye. The Hunter has clearly equipped the new Exotic SMG Osteo Striga. Osteo comes from the Greek word “osteon” which means bone. A striga is a parasitic plant known also as the “witchweed.” We do not yet know what kind of perks Osteo Striga will include, but it is clear that the weapon is very on theme.

The last newer detail we noted occurs around the 40 second mark. A Titan is battling against one of the “Lucent Brood” or a Hive Knight that has been infused with Light. The Lucent Brood releases what appears to be either a melee attack or a form of a super and the Titan slams down their shield to create a barrier. This move will likely be part of the Void 3.0 update that will be part of the expansion. The light subclasses are being reworked to more closely resemble Stasis and Void will be the first to be updated.

We are sure Bungie has a few tricks up its sleeve. As Ikora Rey notes in the trailer, "We're in the domain of the god of cunning. Things are never what they seem." The Witch Queen expansion can be pre-ordered now for $79.99 USD on all available platforms. The Deluxe Edition includes Seasons 16-19, two Year-5 Dungeons, an Exotic SMG, catalyst, ornament, and an Exotic Sparrow. Those who pre-order the Deluxe Edition will also receive a Throne World Exotic Ghost Shell, the Enigma Exotic emote, and a new emblem, some of which is visible in the video. The Witch Queen expansion will officially release on February 22, 2022.

Images and video courtesy of Bungie