Destiny 2 Season Of The Chosen Arrives: Pro Tips On How To Gear-Up And Level-Up

It looks like, “whether we wanted it or not, we've stepped into a war with the Cabal…” Destiny 2’s Season of the Chosen has arrived and it has already made a bigger splash than the previous season. Here is what you need to know about the Season of the Chosen.

The storyline for Season of the Chosen is so far focused on Empress Caiatl, the new leader of the Cabal and daughter of Emperor Calus. Caiatl offered an alliance to Commander Zavala and a position on her growing war council to defeat the darkness of the Pyramids and forces of Xivu Arath. Zavala, with the encouragement of Osiris, declined Caital’s offer. Guardians are now tasked with defeating would-be Cabal warlords in the new Battlegrounds activity.

The season kicks off with the good ol’ shootout on Battleground: Behemoth. This is a Battleground on Nexus that the player will be able to return to later. The Battleground is divided into fairly straightforward sections and ends with a boss fight. The Boss will drop the new seasonal artifact, the “Bell of Conquest”, and the Guardian will be asked to bring it to the War Table in the The Hub for Emergency Logistics and Maneuvers (H.E.L.M.). 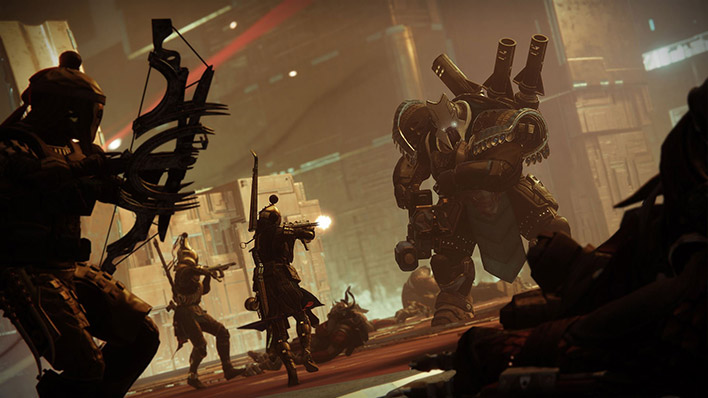 The H.E.L.M. is a new social space located in the Tower. Here, the Guardian will quickly speak with Zavala, the Crow, and Osiris before being tasked with heading nearby to the recommissioned Umbral Decoder and Prismatic Recaster. After these interactions with the Umbral Decoder and Prismatic Recaster, the Guardian will go back to the War Table and speak with Lord Saladin. Lord Saladin will then send the Guardian to another Battleground on Europa to defeat Basilius the Golem.

Progress through the Season with the Hammer of Proving

The Hammer of Proving functions much like the Cryptolith Lure from the Season of the Hunt. It is essential in Battleground Activities and is what will allow Guardians to focus Umbral Engrams. It must be slotted with a Challenger Medallion, which can be earned by finding 14 Cabal Gold. Thankfully, Cabal Gold is fairly easy to obtain. Guardians can earn Cabal Gold through Playlist Strikes (including Nightfalls), Gambit, Crucible, public events, dungeons, Nightmare Hunts, and the Blind Well in varying amounts. For example, one playlist strike alone will net Guardians the 14 Cabal gold needed to slot the Challenger Medallion.

Guardians will want to head into a Battleground activity once they have slotted their Hammer with a Challenger Medallion. The Battleground activity will appear as a three-player match made under the existing strike playlist. Guardians will be rewarded with one Trial Chest after the boss has been defeated. Guardians should smash their chest to receive at least one charge. The Hammer of Proving can initially hold up to three charges at once but will be able to be upgraded later. This charge is essential for the Umbral Decoder and Prismatic Recaster. 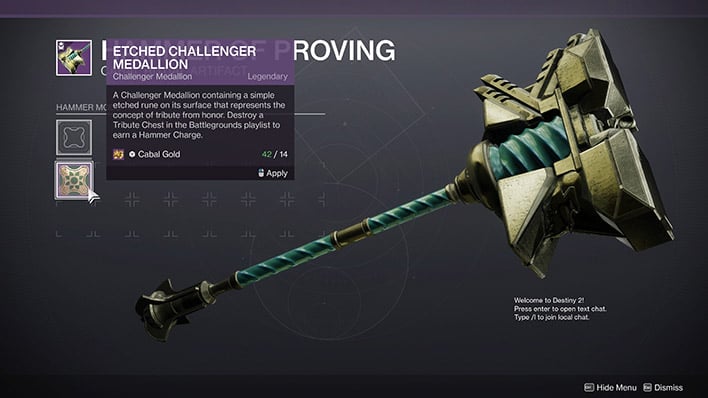 Get New Gear with the Umbral Decoder and Prismatic Recaster

Guardians who played through Season of Arrivals will already be quite familiar with the Umbral Decoder and Prismatic Recaster. Umbral Engrams are earned through simply playing the game and can be turned into the Umbral Decoder to receive weapons and armor. Most Guardians will want to take advantage of the accompanying Prismatic Recaster. The Prismatic Recaster allows Guardians to “focus” their engrams to obtain specific kinds of gear or gear with higher stat rolls. The more a Guardian wants to focus their Umbral Engram, the more charges they will need from the Hammer of Proving. 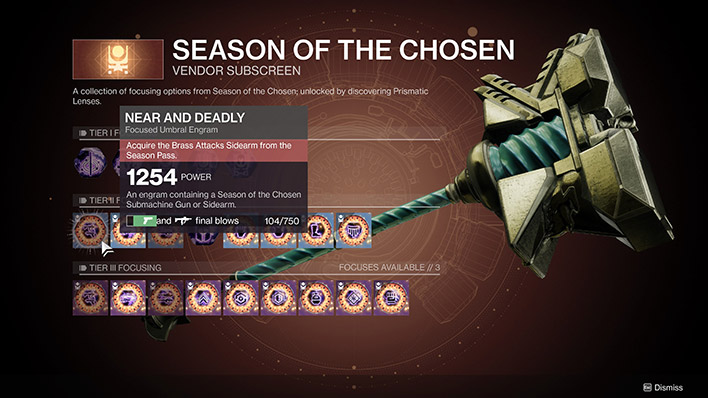 There are three tiers of focusing. The first tier will cost the player one charge and a few legendary shards. However, this tier contains a wide variety of rewards and Guardians may not get exactly what they want. The other two tiers provide more specific rewards, but will be more expensive. Some of these Umbral Engrams may also have other requisites. For example, Guardians will need to first get 750 submachine gun or sidearm final blows to access the “Near and Deadly” Focused Umbral Engram.

Season of the Chosen First Impressions

We argue that Destiny 2 is at its best when it embraces that it is primarily a loot-and-shoot game. The Battleground Activity, Hammer of Proving, and Umbral Engrams provide players with plenty of looting and plenty of shooting. We particularly are looking forward to the introduction of the two additional Battlegrounds and possible exotic weapons.