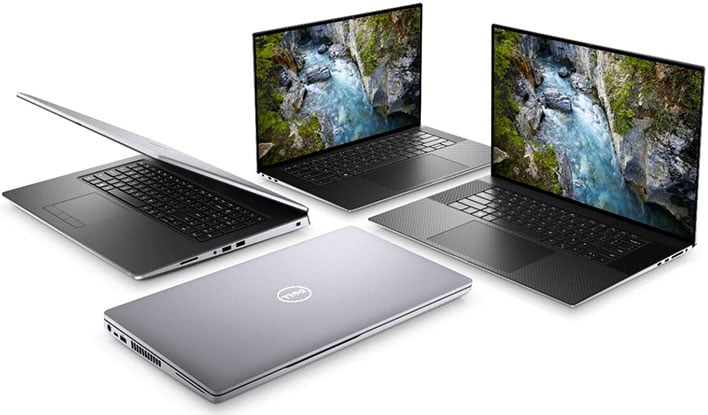 Last week, Intel launched its new 10th generation Comet Lake-H mobile processors, which will find their way into new laptops from the likes of Lenovo, Gigabyte, MSI, and ASUS (among others). As you might expect, Dell will also be among the major OEMs to adopt Comet Lake-H processors, and today we’ve got leaked images of three such devices.

The first is the XPS 15 9500, which is a complete redesign for the laptop. In the image above, the XPS 15 9500 is pictured at top, with its larger XPS 17 9700 sibling shown at the right -- the new Precision models are shown at the left and at the bottom. The most striking difference, however, is with the display, which is allegedly moving to a 16:10 aspect ratio. This move isn’t without precedent, as the all-new XPS 13 was announced earlier this year with a 13.4-inch InfinityEdge display featuring a 16:10 aspect ratio.

With the XPS 15 9500 and XPS 17 9700, we’re reportedly looking at a resolution of 3840x2400 (per previous leaks). There are thin bezels all around, with the new aspect ratio doing its part to help reduce the bottom “chin”. We also see a much larger trackpad along with dual speakers flanking the keyboard. A recent UserBenchmark listing for the XPS 15 9500 showed it decked out with a Core i9-10980HK processors and a GeForce GTX 1650 Ti discrete graphics cards.

Unfortunately, there isn’t much that we know about the 2020 Precision family other than what we see in the opening image. However, it’s a given that these machines will also adopt 10th generation Core processors as well.

Given that the above “family shot” of these new XPS and Precision notebooks was first posted to Dell’s own website and then taken down, we can assume that the official launch can’t be too far away at this point.