Dell is retooling one of our favorite productivity laptops, the XPS 13, with more powerful hardware packed into a thinner and lighter profile than any previous iteration. That's saying something because one of the things we like so much about the XPS 13 is that it's a svelte laptop. The latest version is even more so, with a tiny 0.55-inch waistline and tipping the scales at a mere 2.59 pounds. That's down from 0.58 inches and 2.64 pounds for last year's model.

"In the past, you’ve seen XPS reimagine the front-of-screen experience with our trademark InfinityEdge design that propelled the industry to adopt thinner bezels and offer a greater viewing experience in the same or smaller footprint. In the spirit of pushing boundaries, or shrinking boundaries, our engineering team journeyed inwards with the same mission to get the XPS 13 as compact as possible for customers who prioritize mobility. This time, our engineers had to rethink the architectural layout under-the-hood," Dell explains.

Shown above is a comparison of the previous generation XPS 13 9305 (2021) on the left and the retooled XPS 13 9315 (2022) on the right. To make the latest version even thinner and lighter, Dell said it opted to "miniaturize" the motherboard to be 1.8x smaller. It's actually the tiniest motherboard ever created and fitted for a Dell PC.
"This engineering marvel created the architectural space needed to pack in a tapestry of new technologies and enlarge the speaker enclosures. The end result is an XPS 13 that is thinner and lighter, yet better sounding, high performing and long lasting," Dell says. 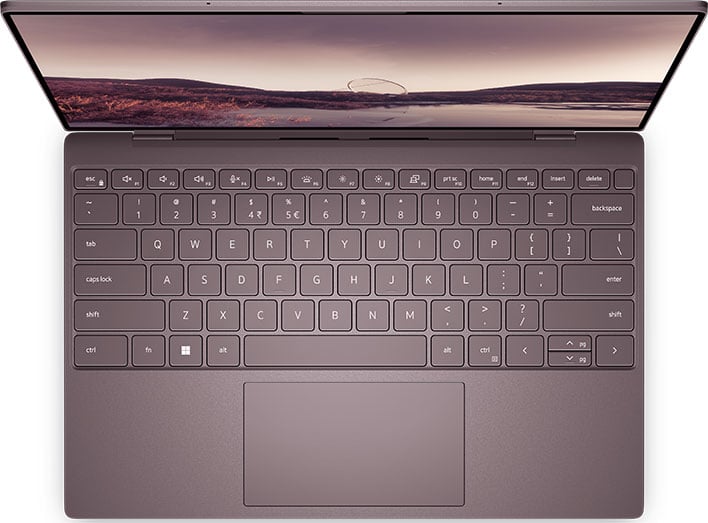 Though small, the XPS 13 swings typically swings a big performance punch in our experience. For this generation, you can equip one with a 12th Gen Intel Core i5-1230U or Core i7-1250U Alder Lake processor, both of which are 10-core/12-thread CPUs (2 P-cores and 8 E-cores) with 12MB of L3 cache. The difference mainly comes down to the clocks—the Core i5-1230U features a 4.4GHz max turbo frequency for the P-cores and 3.3GHz for the E-cores, while the Core i7-1250U kicks those up to 3.5GHz and 4.7GHz, respectively. 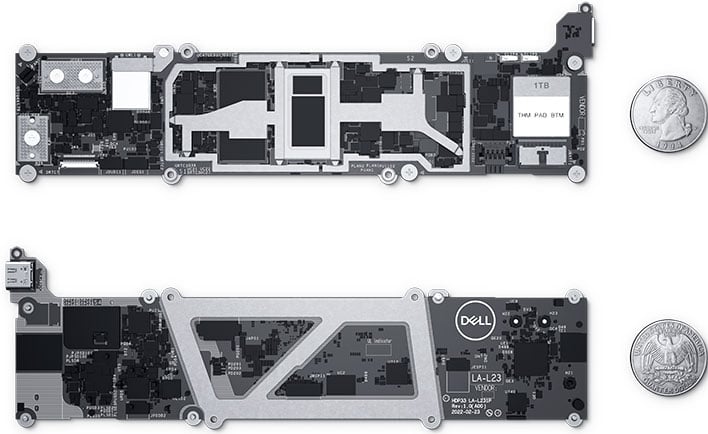 Users can also elect for up to 32GB of LPDDR5-5200 memory (dual channel), along with up to 1TB of PCIe 4.0 SSD storage. Incidentally, this is the first Dell system employ LPDDR5 package-on-package (POP) memory, which essentially means it is stacking components.

As for the port selection, you're looking at two Thunderbolt 4 (USB Type-C) with DisplayPort and power delivery. Dell also includes a USB Type-C to USB Type-A adapter in the box. And then rounding out the spec sheet you'll find Killer Wi-Fi 6E and Bluetooth 5.2 wireless connectivity, a 720p webcam with Windows Hello support, full-size backlight keyboard with 1mm of key travel, and a 51WHr battery. 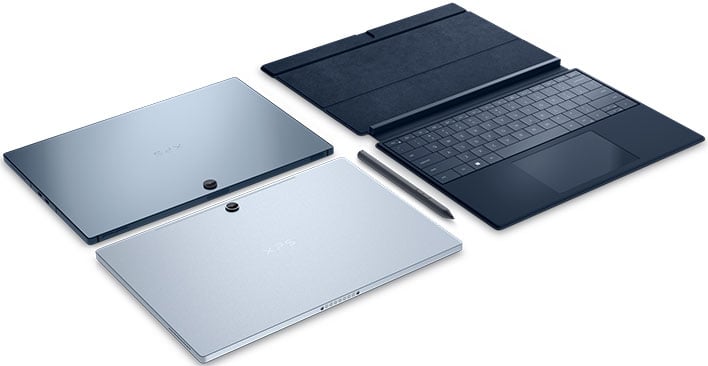 The new XPS 13 is available now starting at $999.
Dell also introduced a new XPS 13 2-in-1 that trades its convertible form factor for a detachable one, like the Surface Pro. So it's essentially a souped up tablet, if you want to call it that.
"The XPS 13 2-in-1 lets you transition freely and fluidly from consumption to full productivity mode by attaching the magnetic XPS Folio, providing a complete laptop experience that supports three angle adjustments (100°, 112.5°, 125°) for flexibility and comfort. Express your creativity with a natural writing and inking experience with the XPS Stylus, comfortable for both left- and right-handed users, turning the device into a state-of-the-art sketchpad to bring your latest creative visions to life," Dell says.
This is the first XPS with optional 5G support. It also comes equipped with Wi-Fi 6E, regardless if opting for the 5G cellular radio.
The specs are similar to the XPS 13, just with fewer options. For example, you can equip the detachable with a Core i7-1250U or Core i5-1230U processor and up to 1TB of storage, but the RAM tops out at 16GB of LPDDR4x-4266. There's also a single display option, a 13-inch 2880x1920 touch panel with 500 nits brightness and DisplayHDR 400 certification.
Dell says the XPS 13 2-in-1 will be available sometime this summer at a price yet to be determined.