Remember those leaked photos of an upcoming Dell gaming laptop that we wrote about last week? Well, they turned out to be real—Dell today formally introduced a new G Series gaming laptop, providing us some additional information that was not available last week, though most of the juicy tidbits will still have to wait a little bit longer.
The reason for that is because Dell announced its new G15 laptop in limited capacity in China, and is holding off introducing it in the United States and the rest of the world until next month. Dell tells us it will provide more details soon, related to the upcoming global launch as well as "other exciting consumer launches happening this spring," whatever those might be. 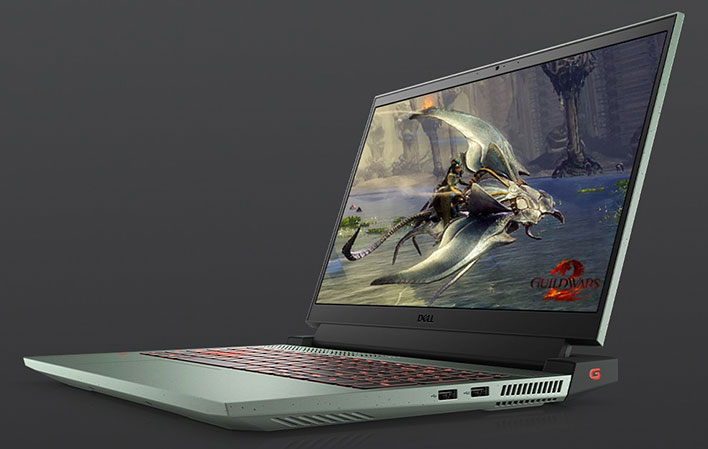 As rumored and now confirmed, the G15 rocks a 15.6-inch display with up a 360Hz refresh rate, powered by up to a GeForce RTX 30 series graphics chip, with GPU performance options ranging up to 115W. In other words, some of the configurations will sport a fully unfettered Ampere GPU inside, to get the most out of the chip (within the bounds of the system's cooling).
There will also be lower end GPU options. While not stated in the press materials we received, a couple of listings on Dell's website in China showcase a refreshed G15 laptop with a GeForce GTX 1650 (Turing) underneath the hood. Those start at around 5,600 Chinese Yuan, which is around $860 in US currency.

We had mentioned before that the leaked images resemble Dell's design language for its Alienware laptops, and indeed that was the intent. Dell tells us the refreshed G15 sports an improved thermal design that is based on its Alienware technology. Similar to the Alienware m15 R4 we reviewed in January, the G15 sports a thicker back section to help with ventilation.
This also suggest the G15 features a similar dual-intake, dual-exhaust airflow design, and perhaps vapor chamber technology to more efficiently dissipate heat.
Other bullet points include an optional four-zone RGB keyboard with lighting zones controlled by AlienFX, a new industrial design, and four new color choices, including Dark Shadow Gray, Spector Green with Speckles, Phantom Gray, and Obsidian Black.