It appears Dell is readying a new gaming laptop with a bit of an Alienware edge to it (at least in the external design language), but will not actually be part of the Alienware family. Instead, it will occupy a spot in Dell's ever-growing laptop family as the G15 5510, and a handful of leaked images give us a glimpse of the supposed upcoming model.
We can't say for sure if the leaked images are legitimate, but they are certainly striking. The design motif is very similar to the Alienware m15 R4 we recently reviewed. This is evident in the above photo, which shows a thicker and different color exhaust system compared to the rest of the laptop, as well as the ventilation slits on the side and bottom. What's different, though, is the lit-up "G" on the back section.

According to MyLaptopGuide, which got its hands on the supposed G15 5510 press renders, the G15 5510 sports a 15.6-inch IPS display with a 1920x1080 resolution and reasonably fast 120Hz refresh rate to keep the action flowing smoothly.
This is apparently a lower end SKU, configured with an Intel Core i5-10200H processor based on Comet Lake and an NVIDIA GeForce GTX 1650 GPU based on Turing. The CPU is a 4-core/8-thread chip with a 2.4GHz base clock, 4.1GHz turbo clock, and 8MB of L3 cache, while the GPU sits lower on NVIDIA's discrete totem pole (especially after having recently launched Ampere in mobile form).
It is a bit of a tough ask for those components to take full advantage of a 120Hz display in more demanding games, though in lighter weight esports titles, hitting triple digit frame rates (or at least getting above 60 frames per second) should be attainable. That will depend part on the power profile and cooling. 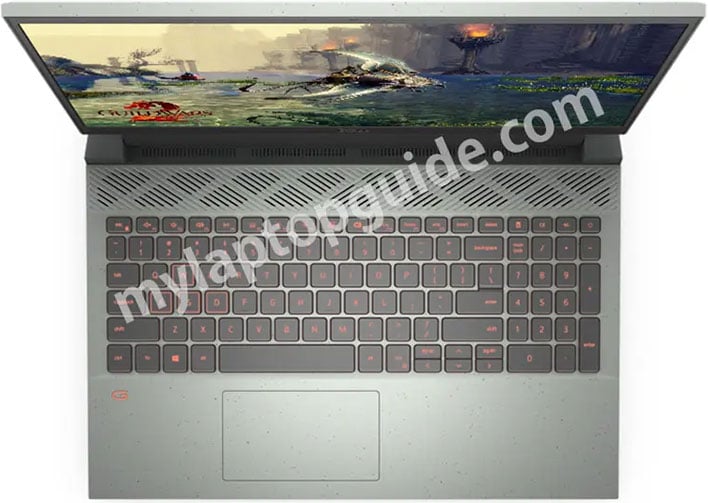 From the looks of things, the G15 5510 will serve up a full-size keyboard with a dedicated number pad, backlit lighting, and a touchpad that sits a little off center (to the left).
Here's a rundown of some other notable features on this model, according to the leak...
Looking at the external I/O options, it appears there are USB-A ports (two on the right side and one on the rear), a 3.5mm audio port (left side), a LAN port (left side, probably 1Gbps, though 2.5Gbps is a possibility), and an HDMI output (rear).
According to the leak, the G15 5510 as configured will launch soon in the US, priced at $899.