AMD has not yet announced its next generation EPYC "Milan" server processors based on its Zen 3 CPU architecture, but they are coming, and presumably soon. Very soon, in fact, if the latest leak is any indication. For a period of time earlier today, a server listing on Dell's site in Canada highlighted a few different Milan options.
The unannounced processors showed up within the configuration section for Dell's PowerEdge R6525 racker server system. It's a dual-socket 1U server system built for high performance computing (HPC), virtual desktop infrastructure (VDI), and virtualization workloads, and is currently available with EPYC "Rome" processors based on Zen 2.
It looks as though at least three Zen 3 parts will be available soon. While the listing no longer shows the unannounced server CPU options, prominent leaker @momomo_us was able to grab a screen capture before Dell caught the apparent error. Here's a look... 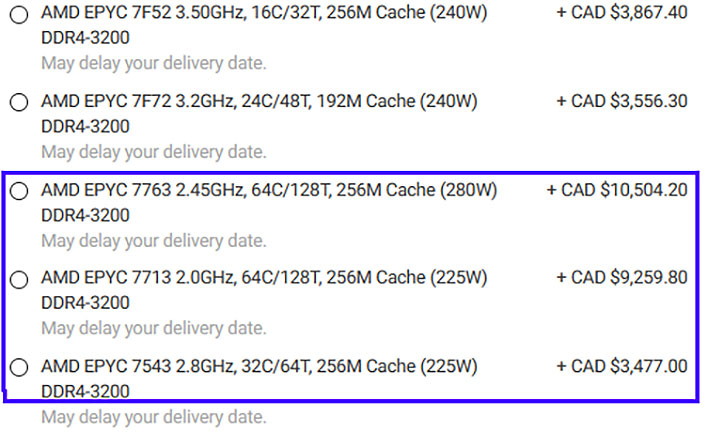 What you are looking at are upgrade prices in Canadian currency over the stock option, an 8-core/16-thread EPYC 7262 processor. There is no option to configure this PowerEdge setup with a CPU, but that part is valued at around $550 to $600 (it sells for a little higher right now). So let's do some currency conversion and quick math, using a $600 valuation for the EPYC 7262...
Take those as very rough estimates, because we are dealing with a variety of factors (OEM upgrade pricing, currency conversions, pricing leaks, upgrade math). That said, based on our quick and dirty accounting, pricing looks to be a little more expensive than the Zen 2 parts they are intended to replace.
As for the specifications, the EPYC 7543 is shown as having 32 cores and 64 threads clocked at 2.8GHz, with 256MB of L3 cache and a 225W TDP.

These specifications are in line with previous leaks. The full lineup will be much more extensive, culminating in the EPYC 7763 listed above. Jumping into Zen 3 territory should provide a nice performance boost as well, compared to existing EPYC options, just as we have seen in the consumer sector with the Ryzen 5000 series.