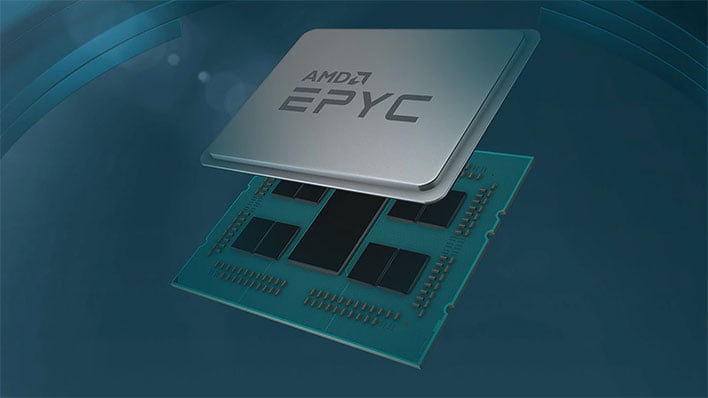 AMD offered up a preview of its upcoming third-generation EPYC "Milan" server processors, based on its 7-nanometer Zen 3 architecture. According to AMD, its next round of EPYC chips will "reset the bar for data computing" with class leading performance (per core and throughput). On the heels of a lofty claim, several supposed SKUs have leaked, offering up core and thread counts, clockspeeds, cache details, and TDP.
The leaks are coming in at a more rapid pace these days, suggesting a launch is imminent. Earlier this week, for example, we caught wind of a 32-core/64-thread EPYC 7543 processor making an appearance at Geekbench (a common destination for unreleased hardware). One of the takeaways from that benchmark listing was the impressive single-core performance the chip exhibited.
Incidentally, AMD cued up a demonstration at CES 2021 of a pair of unspecified 32-core/64-thread EPYC Milan CPUs waxing the floor against a pair of 28-core/56-thread Intel Gold 6258R processors in a weather forecasting workload.
"The speed to complete in this case is very important because if the simulation runs faster, it means scientists improve the accuracy of the forecast by using a larger dataset for the model, or running more simulations per day," Dr. Su noted. "Just just imagine how much more performance you are going to see with two 64-core Milan processors."
Dr. Su stopped short of outlining any details about its 64-core SKUs. However, if the latest leak is accurate, then these are the specifications that are on tap, via @momomo_us...
The EPYC 7763 figures to be AMD's flagship Milan CPU, with 64 cores and 128 threads running at a 2.45GHz base clock, and featuring 256MB of L3 cache. There is no mention of the boost clock, though a prior leak has it pegged at 3.53GHz.
Compare those specifications to AMD's current fastest 64-core/128-thread server CPU, the EPYC 7742. Based on Zen 2, it runs at a 2.25GHz base clock and 3.4GHz max boost clock, also with 256MB of L3 cache, and a 225W TDP. As for the 280W part, the EPYC 7H12, it runs at 2.6GHz to 3.3GHz, with the same amount of cache.
Assuming the leaked data is correct, we are looking at a bump in clocks, on top of the benefits gained from moving to Zen 3. Good stuff.