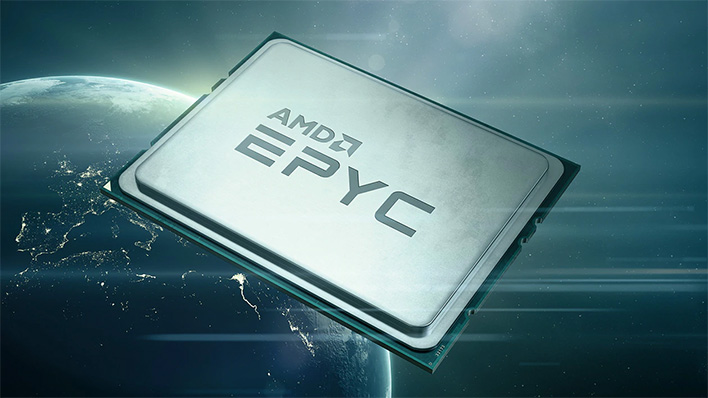 With so much attention being paid to graphics card leaks as of late, it could be easy to forget that new CPUs are on the horizon, too. That would be a shame, because Zen 3 is arguably just as interesting, considering the gains AMD has already made with its Zen architecture up to this point. While we continue to wait for Zen 3, a new leaks suggests AMD's upcoming architecture will give its EPYC server CPUs a sizeable boost in performance compared to its current-generation EPYC processors.
We have heard quite a bit about Zen 3, most of which is unofficial information. Not all of it, however—AMD has made very clear (on multiple occasions) that Zen 3 will be arriving before the end of this year, and that includes consumer CPUs. We also know that Zen 3 is being built on an enhanced 7-nanometer manufacturing process, though more recently, AMD has stopped referring to its at 7nm+.
As far as AMD's efforts in the server space go, the folks at hardwareLUXX claim to have obtained slides detailing some of what to expect with AMD's next-generation EPYC "Milan" CPUs. They refrained from posting the actual slides, because apparently they contain identifying information as to the source of the leak.
That said, the slides purportedly showed a somewhat altered structure to the Core Compute Die (CCD) and Core Compute Complex (CCX), compared to EPYC "Rome" CPUs based on Zen 2. Whereas current generation parts consist of a pair of CCX clusters with the L3 cached split into two 16MB, Zen 3 shows a shared L3 cache arrangement (which remains at 32MB).
As to the performance uplift, the slides apparently reference a jump in overall IPC (instructions per clock) of 15 percent for integer workloads. The biggest gains are said to be had on 32-core/64-thread EPYC processors, which are said to perform 20 percent better compared to Rome. Interestingly, that's consistent with a previous rumor in regards to AMD's Zen 3 desktop CPUs.

Larger EPYC processors won't scale quite as high, though will still deliver a nice boost in performance, if the information is accurate. As in, 10-15 percent for a 64-core/128-thread EPYC processor, versus Rome. The reason it's different is because AMD can hit higher clocks on the lower-core models, to widen the performance gap. It seems the source is somewhat confusing IPC and per-model performance comparisons, so take all this with a grain of salt.

Looking even further ahead, AMD is already at work on its EPYC "Genoa" CPUs based on Zen 4, which will mark a shift from SP3 to the SP5 platform. Not a whole lot is known just yet, but those CPUs are expected to feature PCI Express 5.0 and DDR5 support.