AMD finally had some things to say about its upcoming EPYC "Milan" processors based on Zen 3. During the company's keynote at CES, a slide shown behind CEO Dr. Lisa Su touted the company's third-gen EPYC processors as being the world's highest-performance x86 server CPUs, in terms of per-core and throughput. More than just lip service, a benchmark leak suggests AMD was not blowing smoke.
While AMD teased its third-generation EPYC chips at CES, the company stopped short of an actual launch or naming any specific SKUs. Instead, it focused on some general information and claims, like offering superior total cost of ownership. AMD also showed a demo whereby a pair of 32-core EPYC Milan processors finished a weather forecasting benchmark 68 percent faster than a two Intel Xeon Gold 6258R processors (28C/56T per CPU). Have a watch...
"The speed to complete in this case is very important because if the simulation runs faster, it means scientists improve the accuracy of the forecast by using a larger dataset for the model, or running more simulations per day," AMD says. "Just just imagine how much more performance you are going to see with two 64-core Milan processors."
It was an impressive demonstration, though obviously we have to wait for Milan to actually ship to see how it fares in the real world. While we wait, an EPYC 7643 processor (perhaps what AMD used for its demonstration) found its way to Geekbench. Take a look... 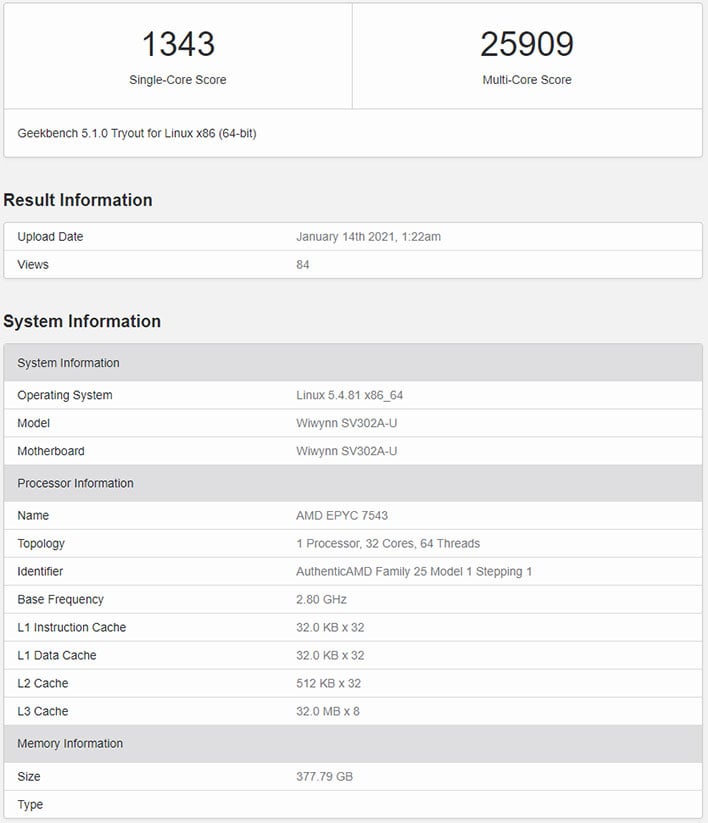 According to the leaked entry, the EPYC 7543 wields 32 cores and 64 cores, with a 2.8GHz base frequency. It is also shown flexing 256MB of total L3 cache (32MB x 8). Other details are not specified, such as the boost clock or TDP. As a point of reference, AMD's Zen 2-based EPYC 7542 is a 32-core/64-thread CPU with a 2.9GHz base clock, 3.4GHz max boost clock, 128MB of total L3 cache, and 225W TDP.
As for the scores, comparing them to the Xeon Gold 6258R is tricky for a couple of reasons. Scores vary wildly between Linux and Windows, so we have to narrow our search to LInux entries. And the database is a bit of a mess, with most entries seemingly run with dual CPUs (though some of the scores indicate otherwise).
That said, the highest single-core score for a Xeon Gold 6258R is 1,133. The leaked EPYC 7543 scored 1,343, which is around 18.5 percent faster. Not bad for what is probably an engineering sample.